It's been far too long since I had some time on a Saturday morning to observe and sketch the sun.  Lest you think that this morning was all sleeping in, drinking coffee and observing, I only had about an hour to set up the scopes, make the observations, and attempt some sketches due to Ian's little league game.  (Incidentally, he was 2 for 3 at the plate and perfect in 5 chances in the infield- whose kid is that?!?!)

The seeing this morning was nearly perfect.  There was only occasional slight atmospheric turbulence, but well over 90% of the time the image was steady as a rock even at high power.  This sketch was completed at 1625 UT (9:25 MST) using my Lunt Solar Systems 60mm HA scope with 12mm blocking filter. 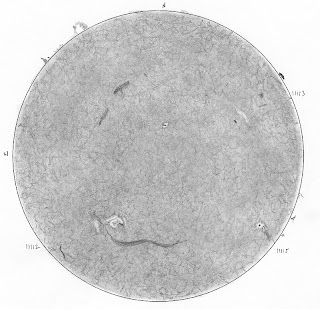 Active region (AR) 11112 is the feature du jour, sporting some bright plage as well as a large and beautiful snakelike filament.  AR's 11113 and 11115 contain much weaker plage, yet there are obvious dark spots associated with these regions...this inspired me to set up my TEC 140 and Lunt solar prism to examine the spots in white light.  Finally, there is a bright ephemeral region on the central meridian in the northern hemisphere.

Below is my sketch of todays sunspots.   While nothing was noted in the ephemeral region, each of the aforementioned AR's contain spots.  AR 11113 contains a single spot, as does AR 11115 although it's umbra seemed like it may be splitting in two.  AR 11112 contains multiple small spots and is quite disorganized. This sketch was completed (quickly) at 1638 UT (9:38 MST). 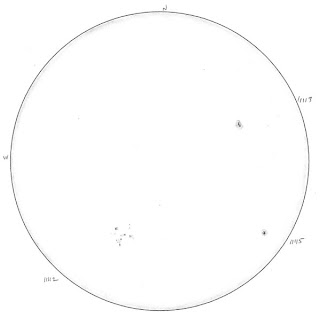 This past weekend I went down to Portal, AZ to do some new moon observing with my good friend Jerry.  If you have read my previous posts regarding visiting and observing in this area, you already know that the skies are some of, if not THE, darkest and transparent skies in the United States.  We were joined this trip by our friends Bill Gates, Jerry and Debbie Hyman, and Christian Weiss.  In estimating the quality of the skies, we looked to stars of known magnitudes, and each of us was able to detect stars as faint as magnitude 7.  Before I share some of my observing highlights, I do want to mention what a great group we had.

Bill, is the master observer of "things that are not really there" objects.  He is a remarkably skilled observer who spent a fair bit of time hunting down some of the faintest nebulosity you can imagine...these areas are so faint that many of them do not even have catalog designations.  Bill finds them by downloading images from the Palomar Observatory Sky Survey (POSS)  and enhancing them on his computer to the point that he can see these faint clouds of gas.  He then hunts them down in the eyepiece.  Bill is observing objects that in all likelihood have never been observed visually by others...Both because they are virtually unknown, and also due to his incredible eyesight.  It is safe to say that while we use the expression "eagle eyes," eagles refer to themselves as having "Gates eyes."  Bill was able to identify stars as faint as magnitude 7.4 naked eye!  7.2 was the best I could muster...Of course, I was distracted by the bright zodiacal light and the Gegenschein, a phenomenon I had heard of but never seen...

Jerry and Debbie are friends that we have come to know through various "all Arizona" star party events.  They are quite passionate about amateur astronomy and spending time observing with them is always a treat.  I learn a lot from them, and the crisp wide-field views through their binoculars were simply stunning (not to mention the new 8 inch Celestron Edge HD they brought!).

Christian has been visiting Tucson while completing the research for his Masters Thesis in optics.  He is modeling the optics for Giant Magellan Telescope (I hope I have that right Christian!) and soon will return to Switzerland where he will graduate.  Christian is the type of observer who inspires each of us with both his passion and skill.  I know we will all miss him.  It is so refreshing to spend time with a group like this who appreciate observing all types of objects and sharing the experiences with each other. 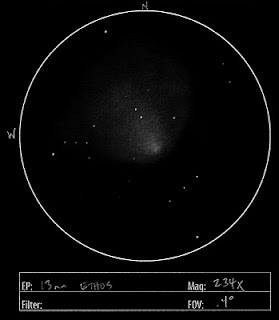 I am only going to post a few of the highlights from my two nights in Portal, beginning with Comet 103P/Hartley.  You can read about this comet that I have been observing over the past month in some of my earlier posts.  What was amazing was that the comet was visible to the naked eye as a fuzzy spot in the constellation of Cassiopeia.  It has brightened considerably and while still diffuse, sports a bright nucleus and extensive coma.  The comet is now appearing to move swiftly, approximately 5.8 arceseconds per minute during the time I was making the sketch...that translates to about 2.5 degrees of sky per day!  The sketch was made on the night of 10-10-2010 through my LX200 12 inch SCT and a 13mm Ethos eyepiece, yielding a magnification of 234X and a field of view of.4 degrees. The comet's distance from the earth was approximately .142 AU, and its distance from the sun was 1.093 AU (one AU = 93 million miles). 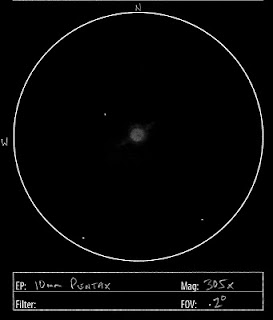 With Christian leading the way, I observed several planetary nebulas over the weekend. One of the benefits of having a telescope with 12 inches of aperture is that I can now begin to see subtle detail in these nebula that was not available to me with lesser aperture.  The sketch to the right is of NGC 7009, commonly known as the Saturn nebula, due to the extensions on either side the nebula that resemble Saturn's ring structure.  This nebula is obvious in most scopes at magnitude 8.3 as a small disc of uniform brightness. Magnifying this cluster with a power of 305 reveals the outer halo and extensions.  Careful observation also revealed some subtle darkening toward the center. This nebula is approximately 2900 light years away in the constellation of Aquarius. 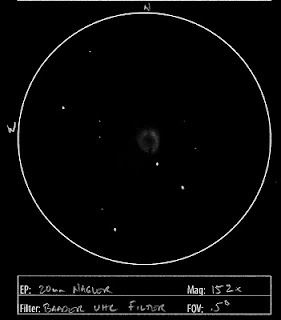 To the left is another large but faint planetary that flies through the sky low in the south in the constellation of Grus (the crane).   IC 5148 is large, approximately 2 arc minutes in diameter, yet faint at magnitude 11.  Using a 20mm eyepiece (152X) and an Ultra High Contrast Filter (UHC) the nebula appeared to have a rift running through it, alomst separating it into two distinct objects.  The east half was marginally brighter than the west half, and the entire rim was brighter than the center.  I also observed this object through Christian's 16 inch Dobsonian, and he tells me that this object is actually designated twice in the IC, as object 5148 and 5150.  Either way, this is a very unique planetary and one well worth observing if you can see it from your location.  In Portal, it was perhaps 18 degrees above the horizon. 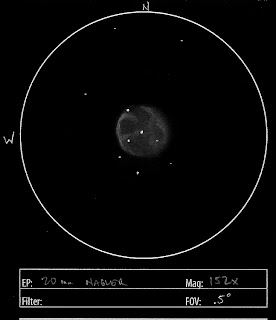 Finally, I'll share with you a sketch I made of NGC 246, commonly referred to as the Skull Nebula, haunting the constellation of Cetus.  This object was simply stunning from the dark site as it revealed several bright arcs along the perimeter, as well as dark cavities within the nebula itself.  the 12th magnitude central star was easily seen as well as a few other stars superimposed on the nebula.  NGC 246 is large, twice the apparent size of IC 5148 at 4.1 arcminutes in diameter.  It resides approximately 1300 light years away, and is estimated to be about 15,000 years old.

Of course, none of this would be possible without Jerry-  From sharing his property to sharing his food, no one hosts a better star party.  I have been to star parties in Colorado, California, Arizona, and even the vaunted Texas Star Party and can honestly say that there is no better place, and no better host than Jerry.  I have mentioned before that he is my mentor in observing and all the sketches above are due in part to observing and learning from him.  Thanks my friend.
Posted by Alan at 8:52 PM 4 comments: 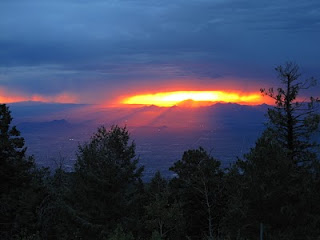 One of the things that I enjoy about working at the Mount Lemmon Sky Center are the incredible experiences that only happen on a mountaintop.  We had a small cadre of guests earlier this week who decided to come up despite stormy weather that would preclude use of the new 32" Schulman Telescope.  As part of our "cloudy night" program, we headed over to the west ridge of the mountaintop to see what view, if any, we may have of sunset.  I think that these pictures speak for themselves....(and one thing they tell me that while the point and shoot camera is convenient, I may have to invest in a DSLR camera) 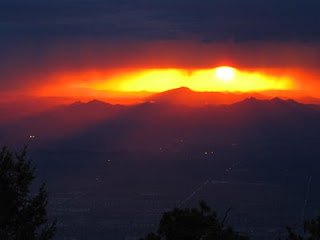