No, this is not a post about politics or the Presidential campaigning shenanigans that we are already suffering on a daily basis here in the U.S.A.  Rather, it is a post to share some pictures of juvenile Red-Tailed hawks that I took yesterday on the summit of Mount Lemmon at Steward Observatory's field station.  I had spent the better part of the day on the mountain working as we had a group of students from Catalina Foothills School District visiting us at the UA Sky School (you can see pictures here).  Following the students departure there was a group of three hawks that were playing near the summit.

The hawks often circle overhead, floating on the laminar airflow that rises over the western summit ridge line and flows to the east.  Sometimes they can 'surf' the air current and appear nearly motionless overhead for 10-20 seconds, or longer.  (It is this same laminar airflow that is a factor in our frequently excellent astronomical seeing conditions).  Below is an image of one of these hawks 'surfing' taken with my Canon 6d and a 70-200 mm lens at the 200 mm setting.  The exposure was 1/1600 of second at ISO 100, with an aperture of f/4.5.  Click on it for the full size image. 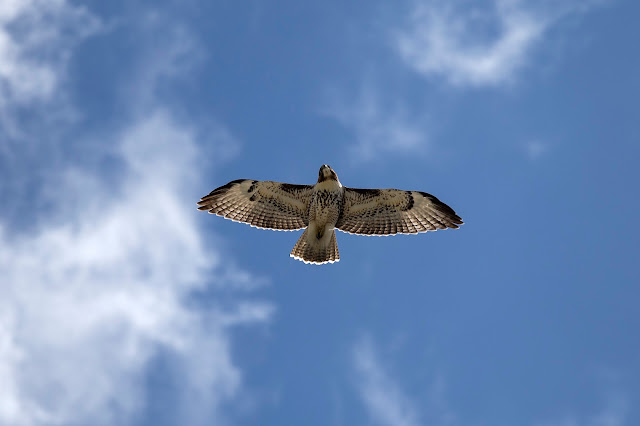 The picture below shows two of the hawks playing- the one on the left had landed in the tree and was then dive bombed by the one on the right.  I took the image a fraction of a second too late as I was hoping to get the hawk on the left still in the tree looking at the incoming hawk.  Both of these pictures are crops from the center of the original image but have not been reduced in size. (EDIT: Apparently, however, Blogger does compress them...) 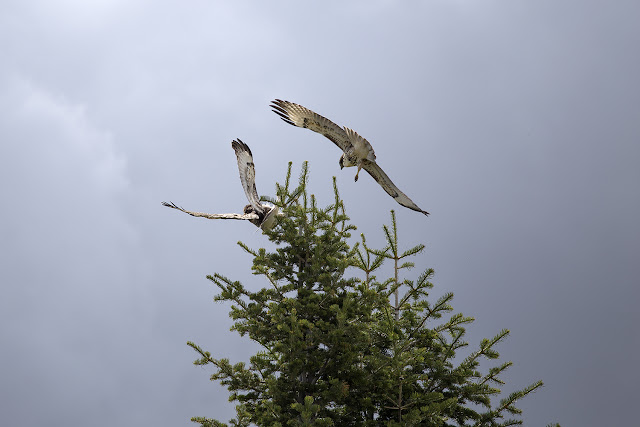 As I catch up at work and attempt to at least get my desktop organized (the Windows desktop on my laptop that is...) I found this image of the Zodiacal light that I took out in Portal Arizona this past winter.  I had just acquired a new Canon 6D and a small German Equatorial tracking mount to take long exposures of the sky...It is a fun image with the Milky way on the right running parallel to the Zodiacal light on the left.  Brian Koberlein published a nice explanation of the Zodiacal light on his blog, check it out. 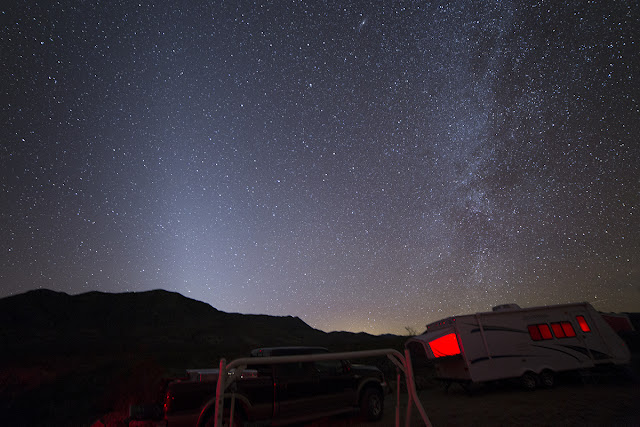 I actually did not set out to take pictures of the Zodialcal light, but was just trying to practice using the camera-mount system as it darkened, in preparation to take pictures of Comet Lovejoy.  I do not remember the details of this capture at all, other than it was 90 seconds at ISO 1600, and I suspect I was using my 14mm Rokinon wide angle lens.  If you look at the upper part of the image, just to the leftt of the Milky Way, you can see the Andromeda Galaxy.  The light dome above the horizon is likely Sierra Vista, and is invisible to the naked eye.

A quick post to share another of the local denizens...this bobcat was wondering through the yard on the 4th of July, and by the time I grabbed my camera the cat had headed across the street...Having no time to change lenses either, this was shot with the Canon 24-105L, at the 105mm setting.  Below is a crop from the center 20 percent or so of the original image. 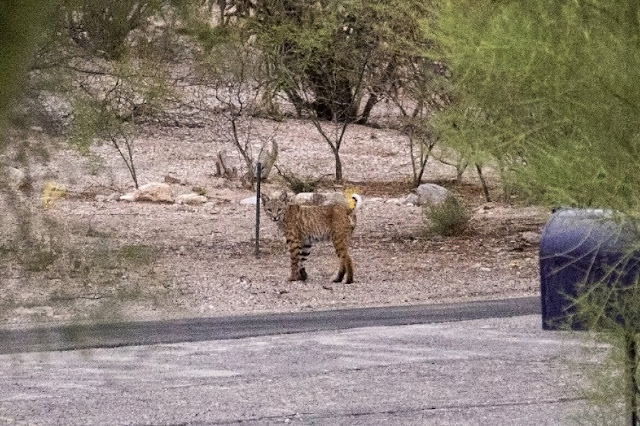