Somehow, a month has gone by since my last post on the blog-  I think that may be a record for inactivity, but it is inversely proportional to my own level of activity.  As it happens between two jobs I have worked every single day in April except the 22nd!  Mostly this is due to extremely successful efforts at developing the UA Sky School, which is a new facet of the Mount Lemmon Sky Center where I serve as Director.  I'll have to write more later about the Sky School, but essentially we are delivering 2-5 day immersive residential science inquiry programs to area schools.  We have a draft website which will be live in the coming week (it may or may not work now, as we are still installing the security certificate) that you can visit at skyschool.arizona.edu

I am heading up the mountain today as we have Safford Magnet School coming up for an overnight program; so this morning I wanted to take a look at the Sun and get an idea of what was going on.  Later I will do a short lesson on solar astronomy for the students where they will create sunspots with magnets and iron filings, as well as observe the Sun in white light and hydrogen alpha solar telescopes.  I was pleasantly surprised to see a fair amount of activity, and I took a quick picture through my Stellarvue 90mm triplet refractor, and Lunt Solar Systems Herschel Prism, using my Canon T2i.  I acquired the image using the software program Backyard EOS, however, I was using a non-tracking mount so it was a bit of a challenge to center the Sun in the field of view and fire off an image.  Below I am pasting two images, one labelled with the active region numbers and one not.  North is up in both images, and East is to the right.  Click the images to enlarge them to full size. 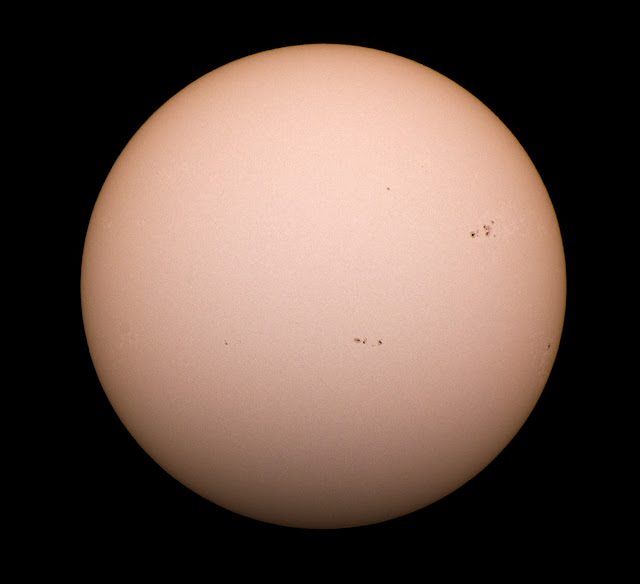 The image was taken at 1533 UT this morning (8:33 Am MST) with the Sun at an altitude of 35 degrees. You can see that there are a couple active regions with spots that have not yet received official numbers from the NOAA.  For example, there is a large spot just rounding the east limb in the southern hemisphere that will likely be designated 1732.  There is another dark spot between regions 1729 and 1730 that also may receive a designation.  Interestingly, I was not able to observe any spots in region 1729. 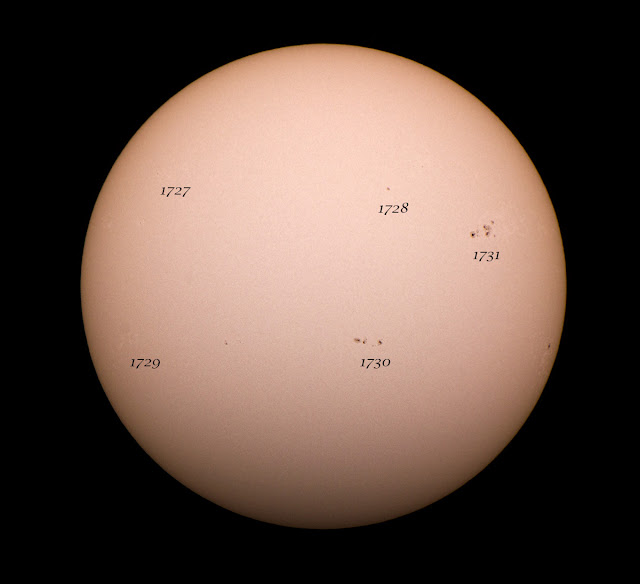