The full report and images will come later, but I wanted to quickly share one of the images I took during last nights total lunar eclipse.  I captured a couple hundred images through my 90mm Stellarvue triplet refractor and 1.6x Barlow lens using my Canon T2i, and they are all in RAW format...so when I have the time to go through them I hope to perhaps make a time-lapse of the eclipse, or at least share some of the nicer shots.  For now, enjoy this image taken at 12:54:54 local time (0754 UT on April 15th).  Click the image to enlarge. 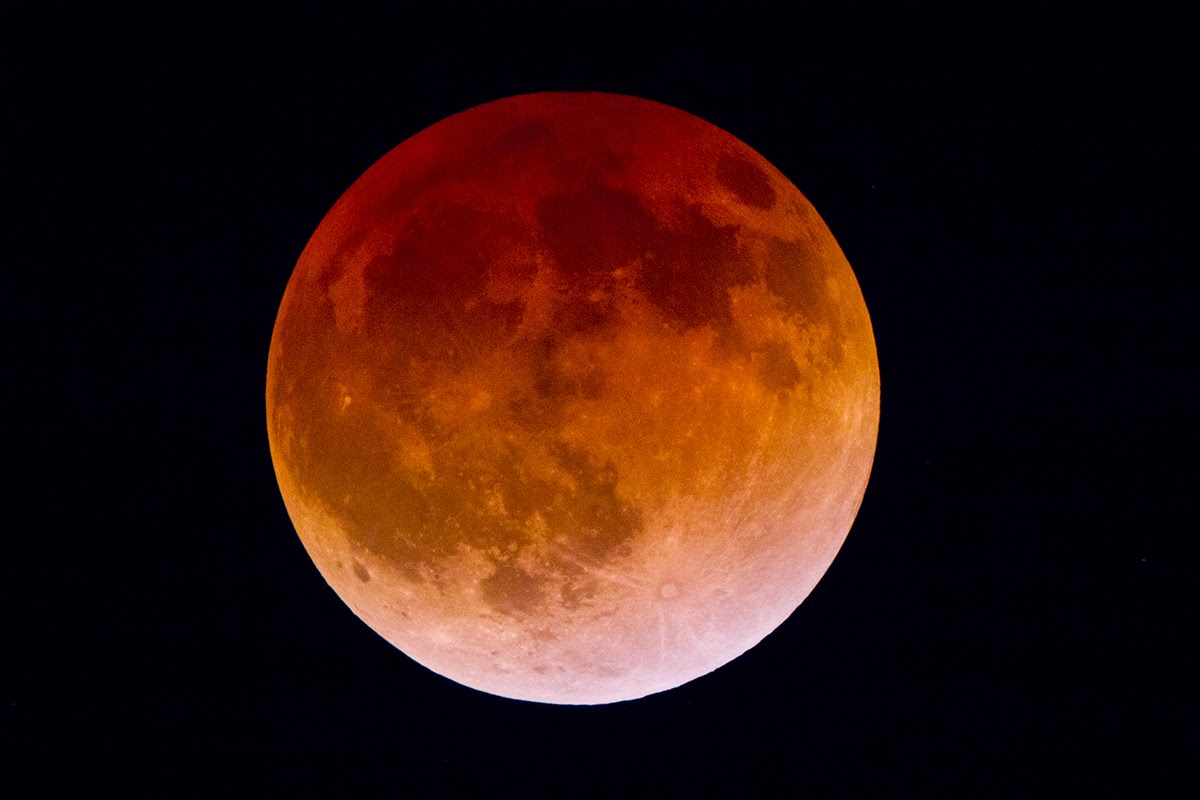 Spending this weekend at home, catching up on all the wonderful responsibilities and tasks that accompany being a husband, father and law abiding citizen, finally afforded me some time to enjoy observing the Sun.  As much as I enjoy preparing my state and federal taxes I believe I enjoy observing more...and the good news this year is that I do not need to pawn an eyepiece or two to pay a tax bill.

Saturday I spent a bit of time observing the Sun through my 60mm Hydrogen Alpha telescope, and was just starting to take some images when the power went out in our neighborhood.  Fortunately, I had already captured an image of a fantastic prominence before the power went out...and it is presented below.  I had to blow out the disc in order to expose the prominence, but you can see just how impressive it was.  Consider that the Sun is about a million miles in diameter and that this prominence was approximately 15% of the solar diameter in size and it is safe to assume that this tower of plasma was standing at least 150,000 miles high! This morning I opened up my observatory and used my 90mm Stellarvue triplet equipped with a Lunt Solar Systems Herschel Prism to observe the Sun in white light.  I was rewarded with some steady views that showed several spot regions.  Below is a stack of 300 frames taken with my ASI120MC camera, at 9:04 AM local time (1604 UT).  Click the image to enlarge it to full size. 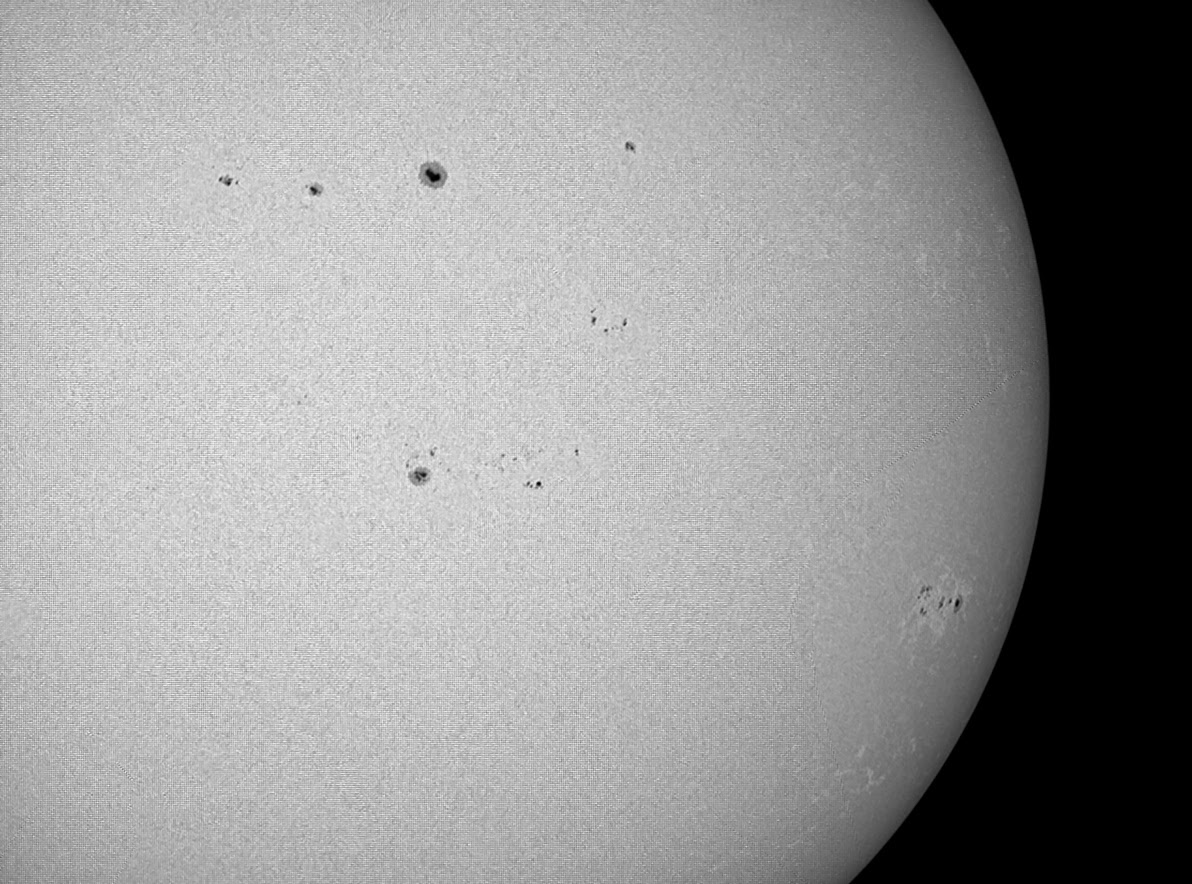 For comparison, here is an image from the Solar Dynamics Observatory taken near the same time with the active regions labelled.  As you can see, good optics, a decent camera and steady seeing can produce some impressive results! Between working many days and nights and generally poor skies on my days off, there have not been many opportunities for me in the past few weeks to get out and practice observing or imaging Mars in my backyard.  Last night was the rare night where skies were clear and I was at home with some time to observe.  Both seeing and transparency were slightly below average, but this photon deprived boy was not about to complain.

I opened up the roof and spent some time observing mars through my C11 between about 9:00 and 9:30 local time (0400 and 0430 UT).  The north polar cap has noticeably diminished in size over the past month as the Martian spring advances and there is a darker collar on the southern edge of the cap.  There continues to be very bright limb haze.  I had a hard time noting many dark features, likely due to Mars still hanging low in the east during my early observation.  I was able to identify Terra Cimmeria in the south, but that was about it.  While the image would no doubt be better with Mars higher in the sky, I was not about to stay up until midnight as I was looking forward to sleeping in my own bed for the first time in a few nights.

Below is an image I took using my ASI120MC camera, and it represents a stack of about 200 frames out of 2500, taken through the C11 and a 1.6x barlow lens.  You can see the north polar cap as well as the thin dark collar below it.  The wider, dark area south of the polar cap is Utopia Panitia.  At the south of the planets disc, the darkest feature facing us is Terra Cimmerium.  The bright spot near the limb on the right is Olympus Mons, and you can see the haze on the limb. 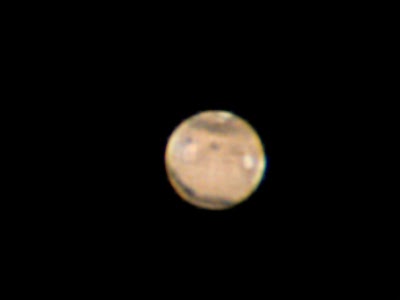 For comparison, here is a simulated image from calsky.com of mars at about the same time: 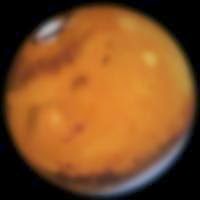