More proof I am not an astrophotographer

I think I need to make a T-shirt that says "I am not an astrophotographer" mostly to poke fun at myself.  I have no desire to devote time to either data acquisition (hours per image) or learning the processing skills to create beautiful images of space (hundreds of hours learning, several hours for each image).  Yet, for some reason, every few months I go through a phase where I stick a camera into a telescope and take some pictures to try and capture something pretty.

I stretch the contrast, try and clean up the noise a little, and assuming I did a decent job with focus call it a day.  Then, I proceed to look at my pictures and realizing that I have the potential to do better I say to myself "Self, you need to learn how to this properly."  I start to play around with photoshop, read about various techniques online and quickly retreat from the notion that I will be furthering my skills in astrophotography.  Time goes by and soon it is "rinse and repeat."  I suspect the truth is that I like taking pictures through a telescope, but am not going to devote myself to it.  The lesson of course is to be satisfied with the process and results and not compare them to the many fantastic images taken by my friends and others on the internet.

Without further ado, more proof that I am not an astrophotographer.  Three more pictures from my recent time on Mount Lemmon (see the previous post).  Again, all of these images were taken with my Canon 6D through a 100mm Sky Watcher Esprit triplet refractor, and all are single exposures.

A shadow grows in the east

A shout out to Lady Galadriel for the reference in my post title.  Tuesday night I was up at the Mount Lemmon SkyCenter (where I am the Director) assisting some folks with a filming project and took the image below at sunset. Watching the shadow of Mount Lemmon move across the San Pedro River Valley as the sun sets and then observing the shadow rise into the atmosphere is one of my favorite phenomenon to witness.  Not only are the views singularly beautiful and serene from the summit, but with a clear atmosphere the Belt of Venus is remarkably vivid.   The picture below was taken with my Canon 6d and 24-105mm lens at the 105mm setting.  It is a handheld shot with an exposure of 1/60 of a second, ISO 200, f/5.6 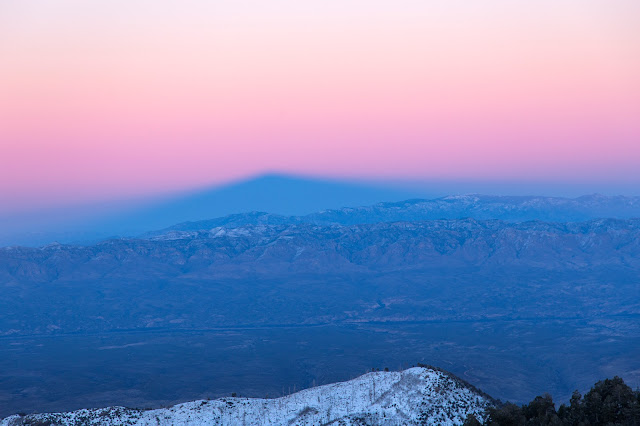 It seems that throughout the year as the azimuth of the the sunset varies, the apparent shape of the mountains shadow changes slightly due to the perspective from which it is illuminated.  I have noticed these subtle changes before, yet on Tuesday night the shadow seemed markedly pointed and picturesque.  Other times during the year the shadow seems to be more rounded.  For fun I may try and take pictures from this same spot throughout the year and see how much the shadow varies or if it is all my imagination.  (Perhaps I am attributing too much to perspective and not enough to atmospheric conditions).  One final note about this image-  If you enlarge it, you can see the LBT on Mount Graham approximately 60 miles to the East.  It is the white spot on the ridge, just above the snowy area on the right side of Mount Lemmon's shadow.

I spent a few hours observing through the Phillips 24" telescope with the guys I was helping out.  Riding atop the Phillips Telescope is a Sky Watcher 100ed f/5.5 triplet refractor that provides very nice wide-field views to our guests.  I am certainly no astrophotographer, but thought it would be fun to try and take a picture through the telescope.  Below is a single 30 second shot (ISO 6400) of the double cluster (NGC 884 and 869) taken through the telescope.  Be sure to enlarge it to its full size. 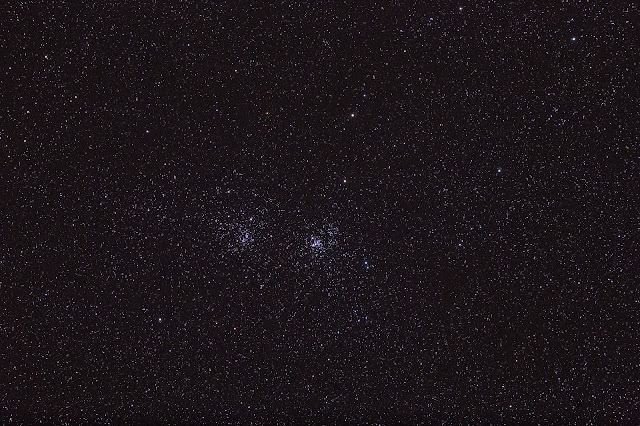 Overall it was a beautiful (and cold!!) night on the mountain, one that reignited my passion for observing.