Followers of my astro adventures know that I am an avid Solar observer.  As much fun as it is to spend clear nights in search of faint objects, it is equally fascinating to spend mornings studying our closest star, the Sun.  Peppered throughout my blog over the past year and a half are many solar observations of my own as well as those of observers around the world.  NASA's Solar Dynamics Observatory has released the video below to celebrate one year of Solar observation...turn your speakers on for the full effect!

Last night I returned home from Ian's little league game at 9:40, ate some dinner, and at 10:15 PM  took a look outside.  I noticed that things appeared very steady so despite the rising, nearly full moon decided to take a look at Saturn.  This is the great thing about a home observatory...no set up!  Simply head outside, roll back the roof and start observing. 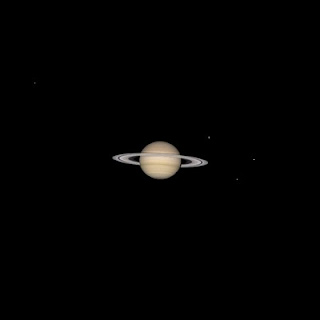 When astronomers refer to "seeing" conditions, they are referring to the steadiness of the atmosphere.  A steady atmosphere allows for higher power critical observation of fine detail, especially when splitting double stars or observing planets.  Last night, I estimate that the seeing was as close to 10/10 as it gets at my house.  Using the 12 inch LX-200 SCT, I started with a 13mm eyepiece and only looked for a second before inserting the 8mm Ethos into the scope (about 381x)...the image was rock steady!  The planet displayed excellent contrast, with the rings shadow looking like a razor sharp inky black line.  Cloud banding was evident and the polar shading was a nice blue/gray.  The Cassini division was a sharply defined gap and even the elusive C ring was easily visible inside both ends of the rings...After about 15 minutes I thought I should try and use "stupid high power" (another technical astronomy term) so I inserted a 5mm Pentax XW (yes, that is 610x!!) and while the image was a bit softer, I was still able to detect the same level of detail every few seconds.  Call me crazy, but Saturn's largest moon Titan looked to be a distinct disc.  It was so amazing I actually dragged Beth out of bed to take a look and even she was impressed.  While I am not a good enough sketch artist to represent Saturn, the simulated image at left is very similar to what was in the eyepiece.
Posted by Alan at 9:05 AM 2 comments:

Email ThisBlogThis!Share to TwitterShare to FacebookShare to Pinterest
Labels: 12 in. LX200 SCT, Saturn

Every now and then I see something that defies words (it happens!)...the video below of the Sun in hydrogen alpha was captured by Amateur Astronomer Michael Buxton of Ocean Beach Calilfornia (visit his website).  It takes a minute to load, so be patient and give it time....it represents a time lapse from 2108 - 2242 UT on April 11th, and is made from images taken at one minute intervals.

Observing the Jet in M87

Working part time at the Mount Lemmon SkyCenter (MLSC) has been a tremendous experience for me over the past several months.  Not only do I have regular opportunities to introduce folks to astronomy and the night sky, but I have access to a world class instrument; the Schulman 32 inch  RCOS telescope. Last night I administered our SkyNights program, and after the guests departed I spent some time with my very good friend, mentor, and SkyCenter volunteer Jerry Farrar observing galaxies in the constellations of Sextans and Virgo.  The night was very dark with no moon, and even the light dome from nearby Tucson was diminished on this Sunday Night.  For those of you not familiar with the mountain or the observatory, the MLSC sits at the summit of Mount Lemmon, just north of Tucson at an elevation of 9500 feet. 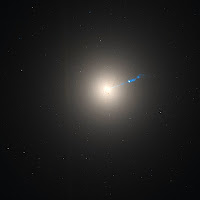 Temperatures last night were in the mid 30's around 11:00 PM MST when on a whim I decided to point the telescope at M87 to see if we could observe the jet that emanates from the super massive black hole at the center of this galaxy.  Lobes from this jet extend out to 250,000 light years from the nucleus, and can be seen in the Hubble space telescope image of the galaxy at left.  Below is an image of this galaxy taken at the SkyCenter which was featured in the March issue of Astronomy magazine.  Click on the image and you will see the small jet shooting out from the core. Utilizing a 21mm Televue Ethos eyepiece and a 2x Barlow (542 power, .2 degree field of view), both Jerry and I observed the galaxy as well as the jet!  It took a few minutes to spot, but we were able to independently locate the jet as well as see a star like bright spot on the jet itself.   To the right of the image is the sketch I completed at approximately 0600 UT on April 4th. 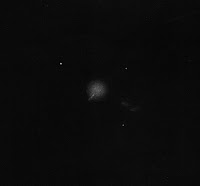 Until 1990, there had been only one recorded visual observation of this jet...an observation made by Otto Struve using the 100 inch Hooker Telescope at Mount Wilson.  It is the kind of observation that very few individuals are lucky enough to make.  This was a difficult observation, but one that makes my personal list of all time favorites, right up there with the whirlpool galaxy through the 40 inch telescope belonging to the late Dave Fredrickson.
Posted by Alan at 10:40 PM 2 comments:

Yesterday temperatures here in the Old Pueblo took a high climb to the mid-90's...now that is sizzling, for this time of year, even for a native naked Puebloan like myself.  Today is slightly cooler but hot nonetheless.  I did manage to get a sketch of the sun in early this morning, all the while trying to keep the sweat from dripping into the eyepiece or onto my clipboard.  There are many active regions, however, none are that bright with the exception of 11183 near the meridian in the north.  My sketch was completed at 1652 UT (9:52 MST) this morning.  In addition to my sketch, I present you an image of the sun taken today from Cloudy Nights Solar Forum contributer, Olivier...visit his website to see some great stuff.  I have taken the liberty of reversing his image to match my sketch.  His image was taken several hours earlier than my drawing and you can see how the filament in the southwest (lower left) changed between our observations.  Also not how many more this filaments developed in the northern hemisphere. 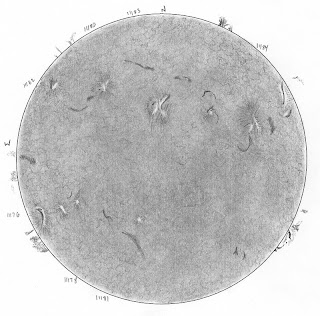 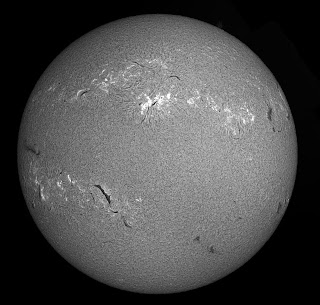