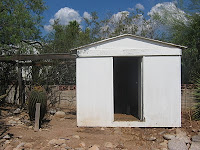 In late 2005, a coworker called me to let me know that she was going to be renovating her backyard and that there was an old roll off roof observatory that the previous owner had built. While she had not been inside in about a dozen years, she let me know that I was welcome to come by and see if there was any way to utilize the structure, which would otherwise be bulldozed. Of course, I was excited by the possibility of having an observatory, but did not hope for much when I saw the building from the outside. The inside proved to be even more exciting…
When it was first opened up, there was a floor to ceiling beehive as well as 4-6 inches of packrat detritus covering the floor. Fortunately whoever the original builder of the observatory was, he had built in a modular way so that it could be easily taken down. With the help of the contractors renovating the yard, I had the roof and walls taken apart in one morning. I abandoned the floor, pier, electrical wiring, and the roll-off rails, and then stripped the walls and roof down to the frames (the siding was destroyed by the rats and bees). Finally, I transported the roof and wall frames to my house, where I consulted with my father-in-law Charles, about his interest in helping me rebuild the observatory. 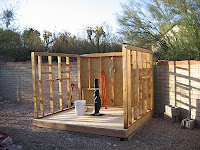 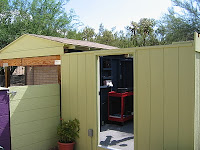 Needless to say, we jumped in headfirst and after about 3 weeks had the observatory up and running. Among our work, we built a new floor; poured a concrete slab and bolted down a pier; spent hours sanding packrat urine off the wall studs; installed new siding; put on new roofing and casters; built rails to roll off the roof; and lastly, painted. I later added electricity and a small window AC unit. As any observatory owner knows, I am always making little changes and improvements.

Without understanding at the beginning, we both realized during the process that the observatory project was very important for us. It allowed us to focus our energies and grieve a little less from what had been the most difficult year of our lives. As most of you know, Beth’s sister Laura had passed away from Brain Cancer in late April of 2005. What follows is an excerpt from the eulogy I delivered at her service:
“I would like to share with you another place where I will always see Laura. Many of you know that I also enjoy the stars. I have wonderful memories of spending time with Laura under that stars…from camping outside Crystal Cave, to the beach in North Carolina, to walking among the tide pools in Rocky point by headlamp - watching Laura, Mack, the girls and Ian delight in finding starfish, anemones, octopus, urchins and the like. Invariably, before we walked back up to the house, Laura would look skyward and point out to me where the Pleiades were at that moment. We would shut off our lights, let our eyes dark-adapt and see how many stars we could count in the cluster. Laura loved the Pleiades cluster, and for this reason, I brought along a picture today. It is over there. During our typical trip to Rocky Point in October, the Pleiades were above the horizon all night and directly overhead at midnight. Not only are the Pleiades probably the most universally recognized grouping of stars in the sky, but stories and mythology surrounding the Pleiades have existed in cultures around the world since the earliest days of recorded history. What is interesting is that in antiquity, cultures as geographically distinct and diverse as Australian aboriginal people and the ancient Mayan associated the Pleiades with death and with eternal life. It is not lost on me that on April 20th, as Laura was preparing to leave us, the Pleiades were setting below the Western horizon. Most common among traditions concerning the Pleiades are persistent stories about a lost Pleiad. Stories from the Romans, Greeks, Japanese, Australian, and various African cultures all share this theme. It is most likely based in the fact there are only six bright stars visible to the unaided eye in the cluster, when in fact there used to be seven. They are still commonly referred to as “the seven sisters.” The poet Aratus wrote:
“Their number seven, though the myths oft say,
And poets feign that one has passed away.
The sister stars that once were seven,
Mourn for their missing mate in heaven”
From now on, I will always look at the Pleiades and smile, thinking about my missing sister in heaven. I know she is up there, at peace among all that grace, magic and beauty, smiling back at me.” 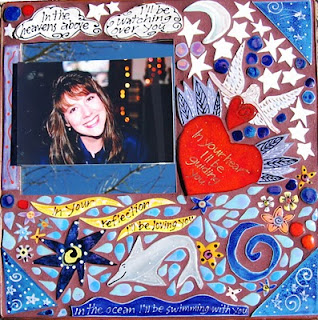 By the time we finished hanging the door, I already knew that we had built the “Lost Pleiad Observatory”. And the picture of the Pleiades that I had at Laura’s service? It is hanging in the corner of the observatory.