Most of the time when I am at the Mount Lemmon SkyCenter I am showing guests the sunset as part of our nightly SkyNights program.  Last night I had gone up the mountain with my son Ian to do a little work and help out one of my colleagues.  Given that he was leading the program I was able to look to the east at sunset and observed the shadow of Mount Lemmon being projected on the inside of the Earth's atmosphere.  This phenomenon is observable from many high mountaintops, and last night the colors were particularly beautiful.  Ian took the image below just as we were heading off the mountain.  Notice the dark blue shadow just above the mountains in the distance.

Email ThisBlogThis!Share to TwitterShare to FacebookShare to Pinterest
Labels: SkyCenter

Lunar Eclipse ~ There's nothing to see here...move along

Odds are that if you are reading this blog you know that this morning just before sunrise western North America was treated to a total lunar eclipse.  This eclipse was unusual in that the Moon entered totality at 7:06 AM local time, just before sunrise, and then set behind the western horizon while still in the central umbra of Earth's shadow.  For a very good primer on Lunar Eclipses, visit the website of Mr. Eclipse, Fred Espenak of NASA.  I took the picture at left during the total lunar eclipse of October 27th, 2004, with a much better camera than I presently own.  Typically, total lunar eclipses render the moon shades of red/orange depending on the types and amounts of particulate matter in the Earth's atmosphere.  Everything from dust to automotive exhaust, to volcanic ash affects the color of the Moon during a total eclipse.

I had planned to get out of bed at about 5:30 to brew some coffee and start watching the eclipse, but subconsciously I must have been fairly excited as my eyes popped open at 4 AM and I could not fall back asleep.  I took a look outside as the predictions were for thick cirrus clouds and to my surprise the skies were reasonably clear.  I had not been up at this hour to do any astronomy in quite some time, so with well over an hour prior to the eclipse, I opened up my observatory and took my first look at Mars during this apparition.  Unfortunately, the seeing was poor and using my 12 inch SCT I had to keep magnifications very low to obtain a steady image at the eyepiece.  As Mars is only about 7.5 arcseconds in diameter right now, it was very difficult to tease out any of the features at low magnification, other than the bright north polar cap...and even that was ill defined.  Given that Mars was high overhead in Leo, I was not expecting much more when pointing the scope over to Saturn.  Saturn is not far from the bright star Spica and is sitting much closer to the southern horizon.  Similar to Mars, the image of Saturn in the eyepiece was mush.  Back inside to warm up and pour a cup of coffee and start eclipse watching.

It was quite relaxing to be able watch the moon move through the partial phases from the warmth of my kitchen window while sipping some fresh coffee.  Occasionally I would go outside to appreciate the "all-sky" view that I was not getting through the kitchen window.  I did not have a watch on, but sometime about 6:43 - 6:45 MST (1343-1345 UT) I observed a satellite moving straight up from the western horizon.  What caught my eye was it's sudden brightening and immediate fading leading me to believe it may have been an iridium flare.  As the moon approached totality and began to turn red/orange, I again wandered outside to get a better view and to try and capture a photo. The image at right was taken with my little pocket sized Cannon point and shoot but gives you an idea of how dark the moon appeared as it neared and entered totality.  In fact, as the moon entered it's total phase, it became invisible to the eye.  Binoculars did not help either.  I believe that the lack of contrast due to the dawn light in the sky as well as the extinction of the moonlight as it passed through the atmosphere near the horizon led to the complete disappearance of La Luna.  There is something quite tranquil about watching a Lunar eclipse, and as much as I wanted the eclipse observing experience to continue I immediately thought to myself, "there is nothing to see here,  move along."

While I am not a photographer, I do want to call attention to accomplished Arizona amateur astronomer Tom Polakis who imaged the eclipse.  Based near Phoenix, Tom Polakis captured several nice images that he stitched into a time lapse.  Click on the image below to see the time lapse full size.  This represents exactly how the eclipse appeared to me visually.

Tucson based amateur astronomer and photographer Sam Rua traveled east of Kitt Peak National Observatory and captured this beautiful photograph of the eclipsed moon and some thin cirrus clouds setting behind the observatories. You can visit Sam's gallery by clicking here. 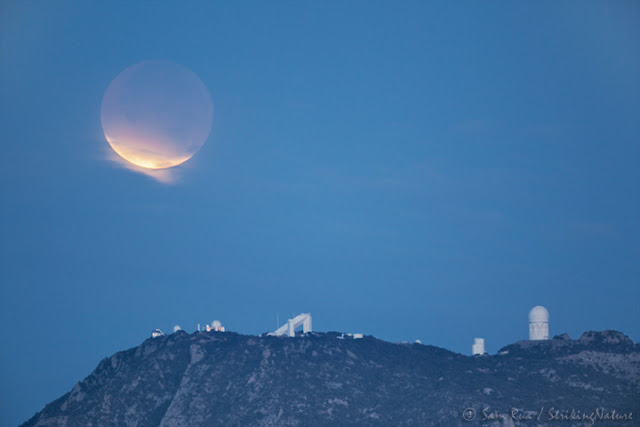 Email ThisBlogThis!Share to TwitterShare to FacebookShare to Pinterest
Labels: Moon

This video is a must see- from NASA's Solar Dynamics Observatory.  You can watch it over and over and each time you will see more and more activity on the Sun...simply amazing!

According to the SDO group:

"Over the past 24 hours we have seen some beautiful solar events. None of them have a direct impact on Earth, but they are astonishing to watch. It just shows how an active Star our Sun really is. Far from boring.

On December 8, 2011 a twisting prominence eruption occurred on the lower eastern limb. The view through the AIA 304 angstrom filter shows us this beautiful eruption.

In the early hours of December 9, 2011 SDO observed a little bit of a different eclipse. An erupting cloud of plasma was eclipsed by a dark magnetic filament. The eruption is still on the far side of the Sun, behind the eastern limb and is slowly moving forward and over the limb sometime next week.

In front you can observe the filament of relatively cool dark material floating across the Sun's surface in the foreground. That filament partially blocks the view of the hot plasma eruption behind it."

Make sure your speakers are on for the full rock concerto....