Yesterday saw the planet Mercury transit the face of the Sun from our unique perspective here on earth.  Slightly more common than a Venus transit which will not happen again in our lifetimes (see this post and this one as well), Mercury transits the Sun 12 or 13 times each century, always in May or November.  The apparent size of Mercury is rather small against the Sun, approximately 1/5 that of Venus.

We had a few programs running simultaneously yesterday for the transit-  up at the summit of Mount Lemmon the SkyCenter hosted a special program for visitors, and we also conducted an outreach event for students at Canyon View Elementary school.  The Sky School was hosting a group of 5th graders from Canyon View at our mountain based program, where I was operating the telescopes.  I set up at the Babad Do'Ag pullout approximately 2.5 miles up the Catalina Highway where we begin our Sky School programs with an exploration of the concept of a Sky Island.  Mercury began its transit prior to local sunrise and the transit is approximately a 7 hour event. I was all set by 5:30 AM and enjoyed watching the shadow profile of the Santa Catalina Mountains slowly creep across the Tucson basin as the Sun rose.  At left is the Coronado 90mm Hydrogen Alpha telescope we used for visual observation, as well as my 90mm Stellarvue triplet, 2x barlow and Canon 6D that I used to take pictures of the transit.  (Many folks ask about utility of the pink foam...it is simply to shade my camera in the Sun!)

Here are a few of the excited 5th graders observing the transit, I enjoyed the amazement of the student in the grey and red shirt exclaiming "It's so small!!"

I took a large number of images (approximately every 10 minutes until it was over) and processing them will require some time.  I did process one from near mid-transit and it is presented below.  As always, click the image to enlarge it and if your browser automatically re-sizes images you may need to click it again. 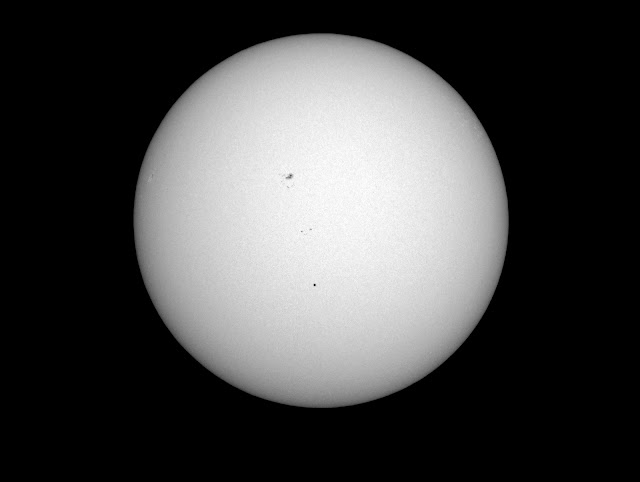 So there you have it- a fun and science filled day sharing the wonders of our Solar System with a group of our future scientists and leaders!