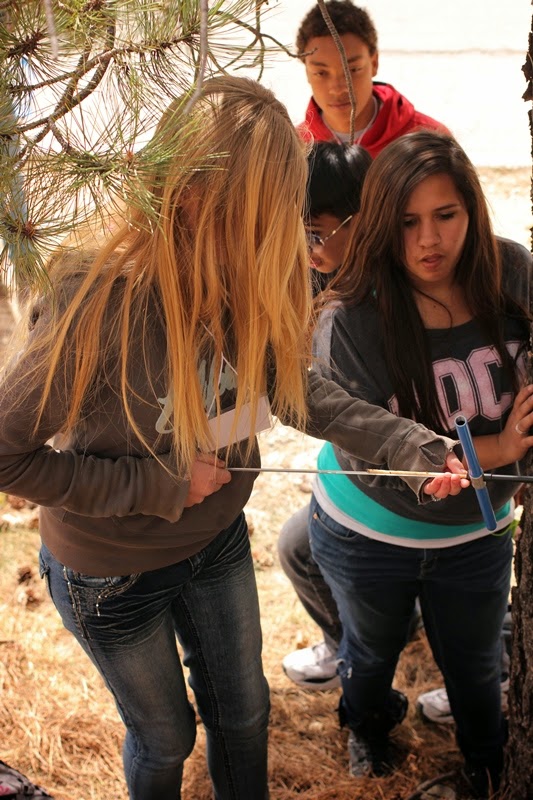 Let's just put it out there up front:  Today, is my 45th birthday.  This week I am at the summit of Mount Lemmon as we host students from Altar Valley middle school at our UA Sky School.  I posted awhile back about the development of the Sky School here and I can not emphasize enough how rewarding this aspect of my job is.  Last week I was honored to accompany Sky School co-founder Ben Blonder as we traveled to the White House where he was honored as a White House Champion of Change in Environmental Conservation Leadership for his vision and work at developing the Sky School.  Above left is an image of one of the students taking a tree ring sample this morning as part of her groups inquiry project to explore the possible relationship between tree growth rates and density.

So while I celebrate the passage of 45 years (gulp) of my life and marvel at how quickly time seems to pass as I grow older, I am fortunate to be spending this time at the Sky School, with incredible colleagues, public school students, friends, and even my dearest Beth and Ian who drove up to celebrate.  As is my custom, I like to mark significant events with astronomical observations, and I took a couple minutes early this morning to set up a solar telescope and take an image.  I was using a 90mm Coronado Hydrogen Alpha Telescope at the summit of Mount Lemmon, and despite steady breezes and an encroaching cold front managed a decent picture. 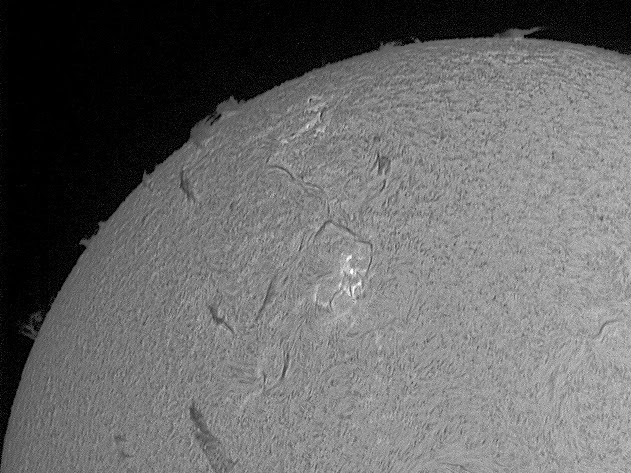 And with that, time for some cake!

No, this is not a blog post to let you know that Mars will pass closer to Earth than at any point in the history of our solar system in early April.  You can find that story circulating on the internet as it does approximately every two years as Mars approaches opposition.  This year, Mars will be at opposition on April 8th and will have an apparent diameter of approximately 15" (arcseconds).  Currently, Mars is .73 astronomical units from Earth and is 96.7% illuminated with an apparent diameter of 12.74"

A few months ago I purchased my first astronomical camera in order to learn to take planetary images in a run up to this Mars apparition.  Mars has always been my favorite planet to observe visually and I want to be able to capture some nice images as well.  Two nights ago I was out observing and imaging Jupiter and was impressed with how steady the seeing conditions were.  Below is an image of Jupiter I captured with my 11" Celestron Edge SCT and a 1.8x barlow lens. 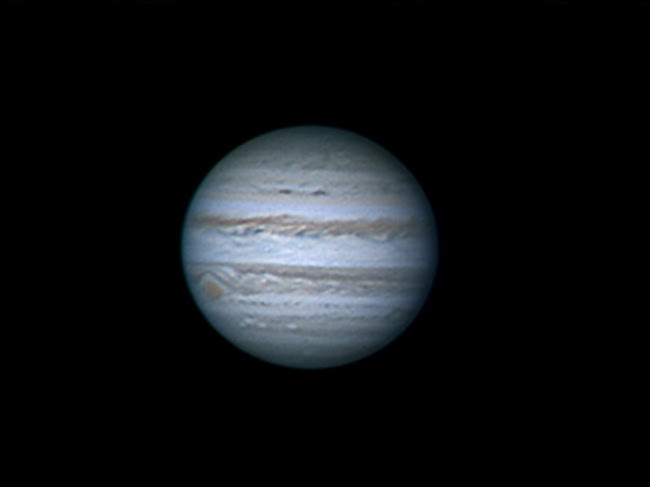 As the seeing conditions were so favorable I decided to stay up far too late and try my hand at my first image of Mars.  I will not go into detail about the trials and tribulations of the process, but keep in mind that Mars is much smaller in apparent size than Jupiter, that its details are quite subtle, and the seeing conditions had deteriorated quite a bit by 1 AM.  I was not able to use the Barlow lens to increase the image scale so the picture below is straight through the C11. 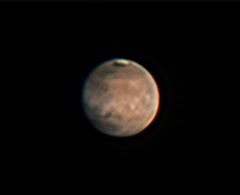 All in all I am happy with the first effort.  I pushed the processing a little too hard but may go back and try again if I have some time.  Of note, you can see clouds in the Olympus Mons region on the right side! Olympus Mons is the largest volcano in our solar system and these are likely orographic clouds.  For comparison, below is a simulated image from the website calsky.com. 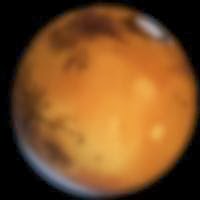 A wet winter storm has been making its way through Arizona today, delivering some much needed precipitation to the desert and mountains alike.  Yesterday I heard that the Santa Catalina mountains north of town are experiencing the driest winter in 30 years.  Typically the mountains would see an average of approximately 180 inches of precipitation annually, and this year there have been less than 30!

After a full day of wind and rain, the clouds broke in the west just before sunset and a spectacular double rainbow appeared in the eastern sky.  I grabbed my camera and although I did not have a lens wide enough to capture the whole rainbow I still managed to grab a few quick images of the vibrant colors.

Click the images to enlarge them to full size 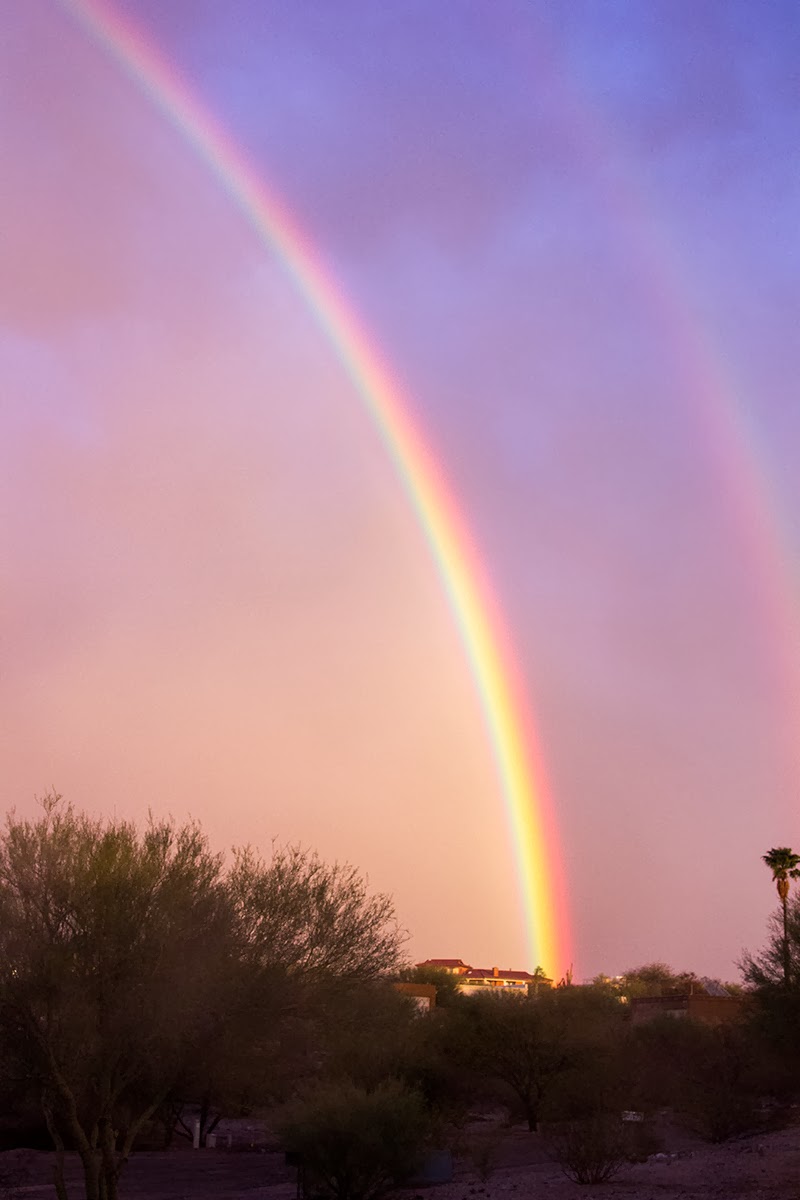 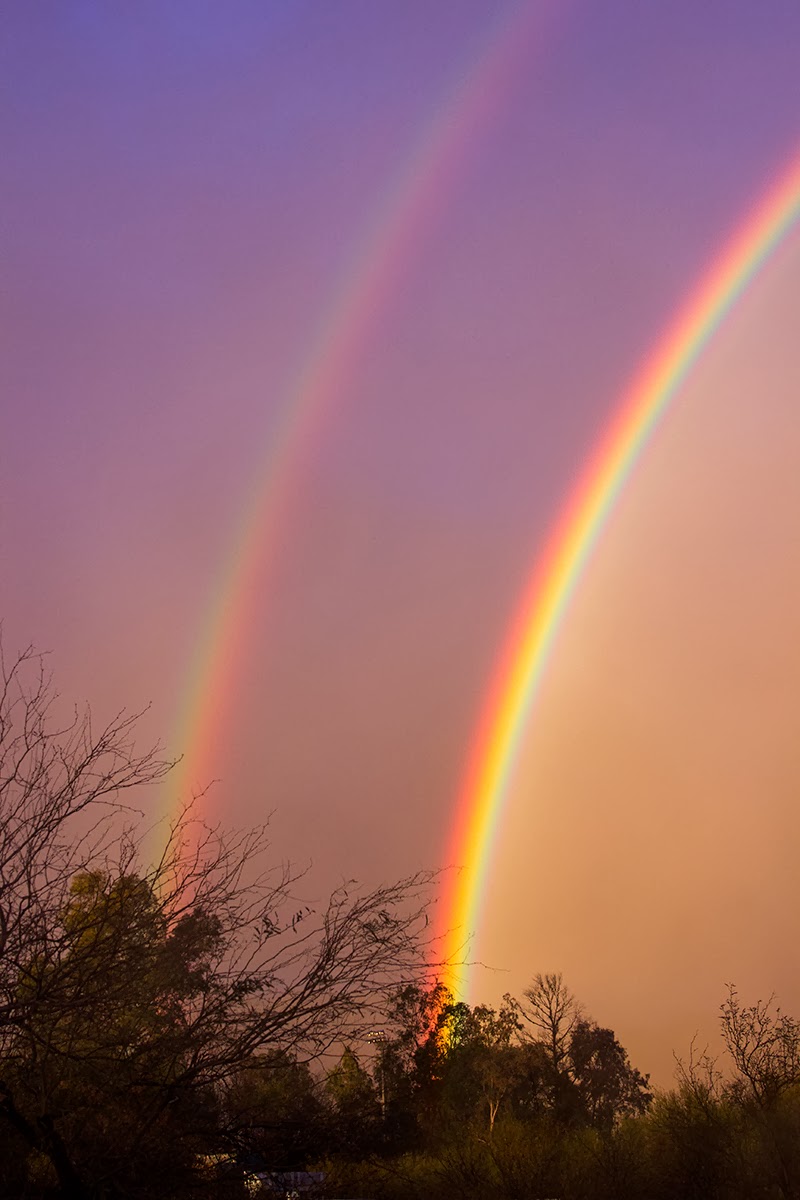 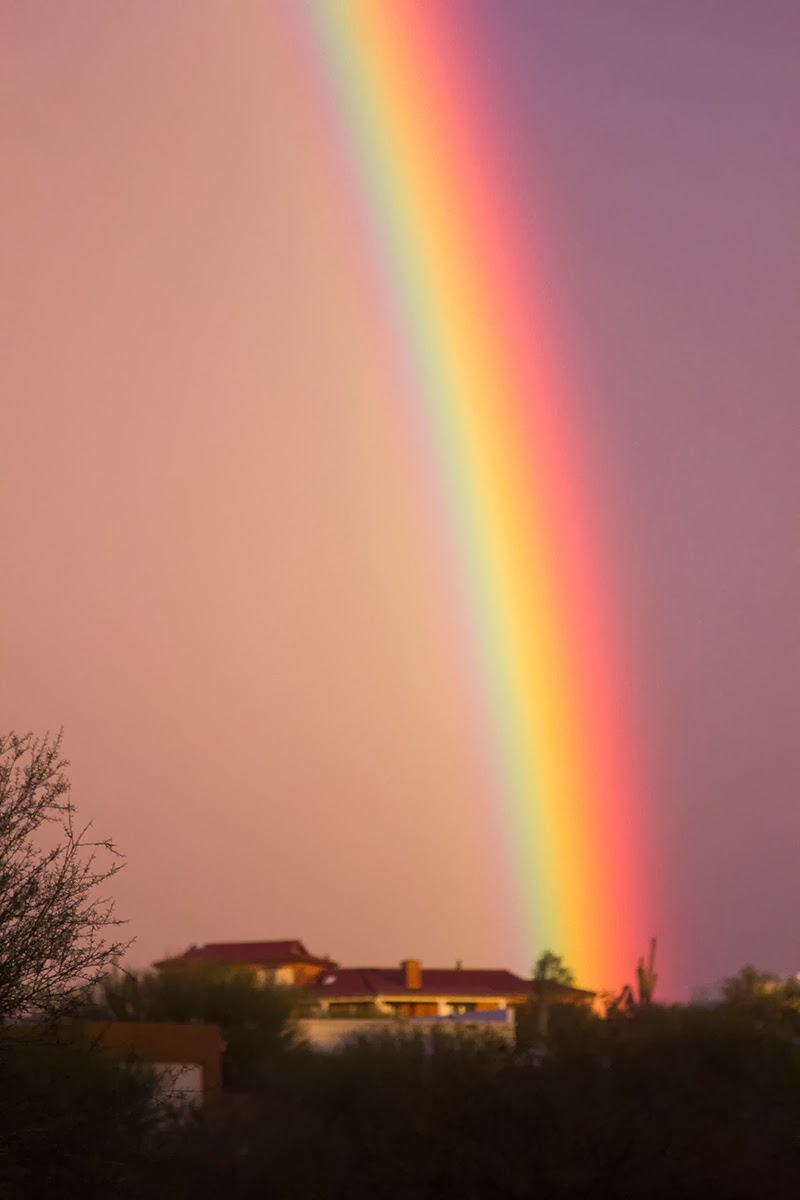