Back to the drawing board

My life has been super busy-  In addition to a new job, I have a new telescope(yipee) and next week is my sons Bar Mitzvah for which he has been studying for a year...but that is fodder for another post or three when I get the chance. This morning we have the clearest skies we have had in about a week and I decided that before I did any of the 100 things I need to get done today that I was going to make a sketch of the Sun.  I love solar observing and sketching what I see and somehow we are mid-way through February and I had only managed three solar sketches this year! Finally, I present number four!

My sketch was completed at 1640 UT (9:40 MST) under clear skies, with average transparency.  There does seem to be a bit of humidity in the air as evidenced by the whitish color of our sky (typically our skies are a picturesque blue), as well as the water dripping off of the roof.  Regardless, the skies were still better than average and I was able to see much more detail that I could reasonably sketch.  Believe it or not, the infrequency of my sketching has also left me a bit out of practice...so this took a bit longer than usual and I am not quite as thrilled with the detail on paper.  The Sun was at an altitude of approximately 29 degrees, and an azimuth of approximately 129 degrees.

There are not many active regions on the face with AR 11420 quite near the meridian and containing a dark spot.  Just above this AR 11419 contains two smaller spots and is somewhat brighter.  To the east of these regions is a bright plage region that may be developing as evidenced by a strong dark filament within.  11418 near the SW limb is unremarkable.  Perhaps the most interesting feature of the day is the beautiful "filaprom" on the SE limb.  I do not know if this is the technical name, but this feature was very much 3D in my telescope as the filament and prominence were very clearly connected.

Below is a comparison image from the Big Bear Solar Observatory from 1659 UT, about 20 minutes following my sketch.  Big Bear maintains a very nice webpage of recent images.

SDO does it again

No time for a lengthy post, but I had to share this video released from the Solar Dynamics Observatory.  Incidentally, today marks the second anniversary of the SDO launch....Just think, it is only over the past year and a half that humans have been able to observe the dynamic behavior of our star in high definition!

According to SDO: "As if it could not make up its mind . . . darker, cooler plasma slid and shifted back and forth above the Sun's surface seen here for 30 hours (Feb. 7-8, 2012) in extreme ultraviolet light. An active region rotating into view provides a bright backdrop to the gyrating streams of plasma. The particles are being pulled this way and that by competing magnetic forces. They are tracking along strands of magnetic field lines. This kind of detailed solar observation with high-resolution frames and a four-minute cadence was not possible until SDO, which launched two years ago on Feb. 11, 2010."

Comet C/2009 P1 Garradd is back.  Not that it really went anywhere, of course, but I had stopped following this comet when it was no longer visible in the evening/night sky due to its location in the constellation of Hercules.  Recently I had heard that despite the passing of a few months, the comet was still fairly bright and even visible in binoculars.  With Hercules now up in the early morning sky, I had been considering taking a look at it during one of my morning Mars observing sessions.  Yesterday I learned that the comet would be within 1 degree of the globular cluster M 92 this morning, so set my alarm for 4 AM to observe this conjunction.

I was not disappointed!  As can be seen in my sketch at left, the comet is quite bright, at approximately magnitude 7.  It contains a bright nucleus, and while difficult to detect, there appear to be two tails. (These are hard to bring out in the scan of my sketch).   It is unusual to see a bright comet in the same field of view as a globular cluster, and it was well worth the lack of sleep.  I also made a sketch and observation of Mars, but the seeing conditions were poor and the drawing is surely not as exciting as the event depicted at left.

Update:  The picture below was captured from New Mexico the morning following my observation and sketch, when the comet was within .5 degree of M92. 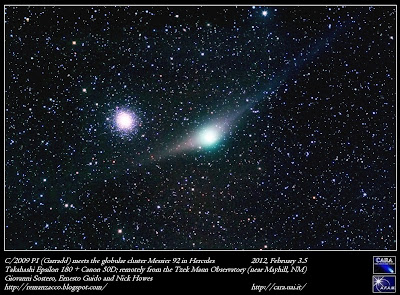