Thursday night I was up at the Mount Lemmon SkyCenter doing some work aligning a telescope with a colleague and we noticed this beautiful thunderhead in the western sky at sunset.  It looked remarkably like a nuclear blast and the colors in the sky painted it beautifully. 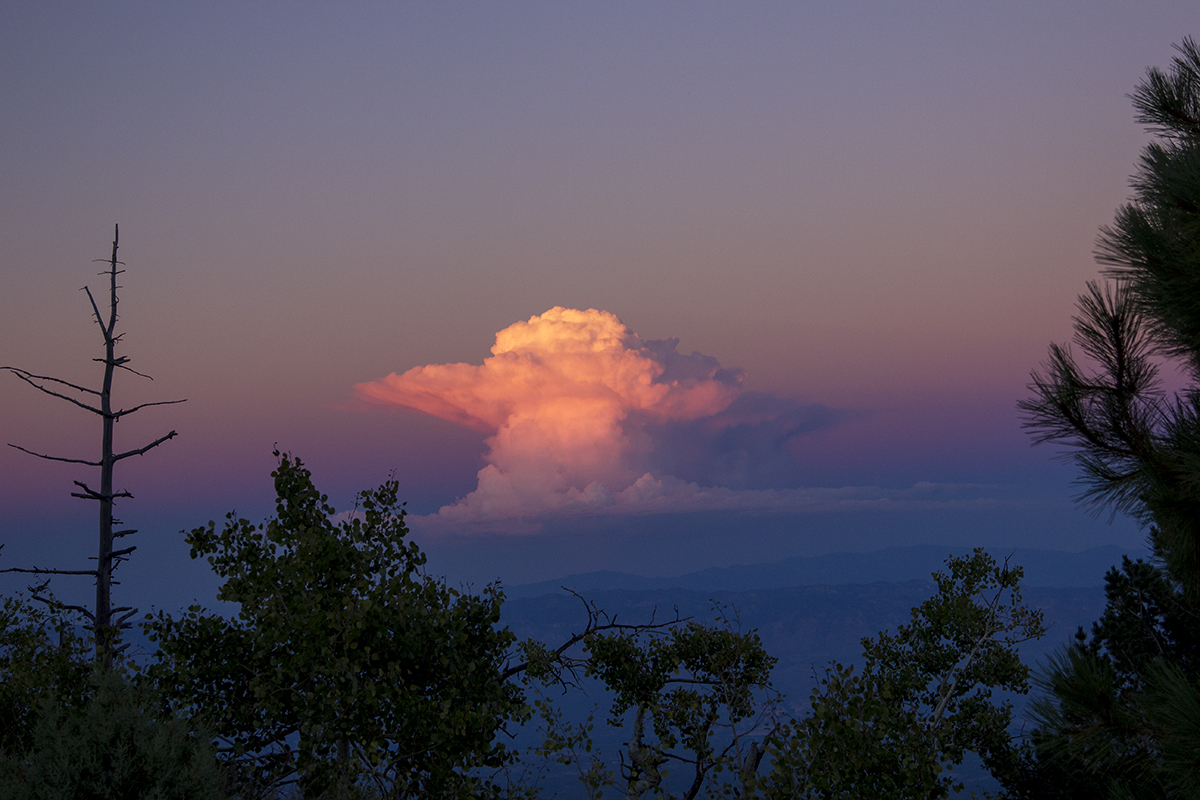 Technically, I believe this is what is commonly referred to as an anvil cloud or in meteorological terms a single-cell cumulonimbus incus. (Incus is Latin for anvil).  These are very impressive thunderheads that can reach very high into the stratosphere, even to altitudes of 60,000 feet!

Two nights ago I went into our storage room where I keep the astronomy gear and gadgets that are not in my observatory and discovered some new friends...We had accidentally left the door open to the storage room the night before and these guys seized on the opportunity to homestead.  I am used to bats flying around the observatory in the evening hours and rather enjoy seeing them flit around and do their part to keep the mosquito population in check this time of year.  However, having a group of 7 of them them swirling around your head in a small room because you are in what they consider their new crib is a rather startling experience.  Below is an image of 4 of the bats that were a little more reluctant to leave than the others...there is something a little too organized in their consideration of strategy...I am pretty sure the guy behind the rafter was in charge and the other three were waiting for his command to proceed with the operation to extract the astronomer. 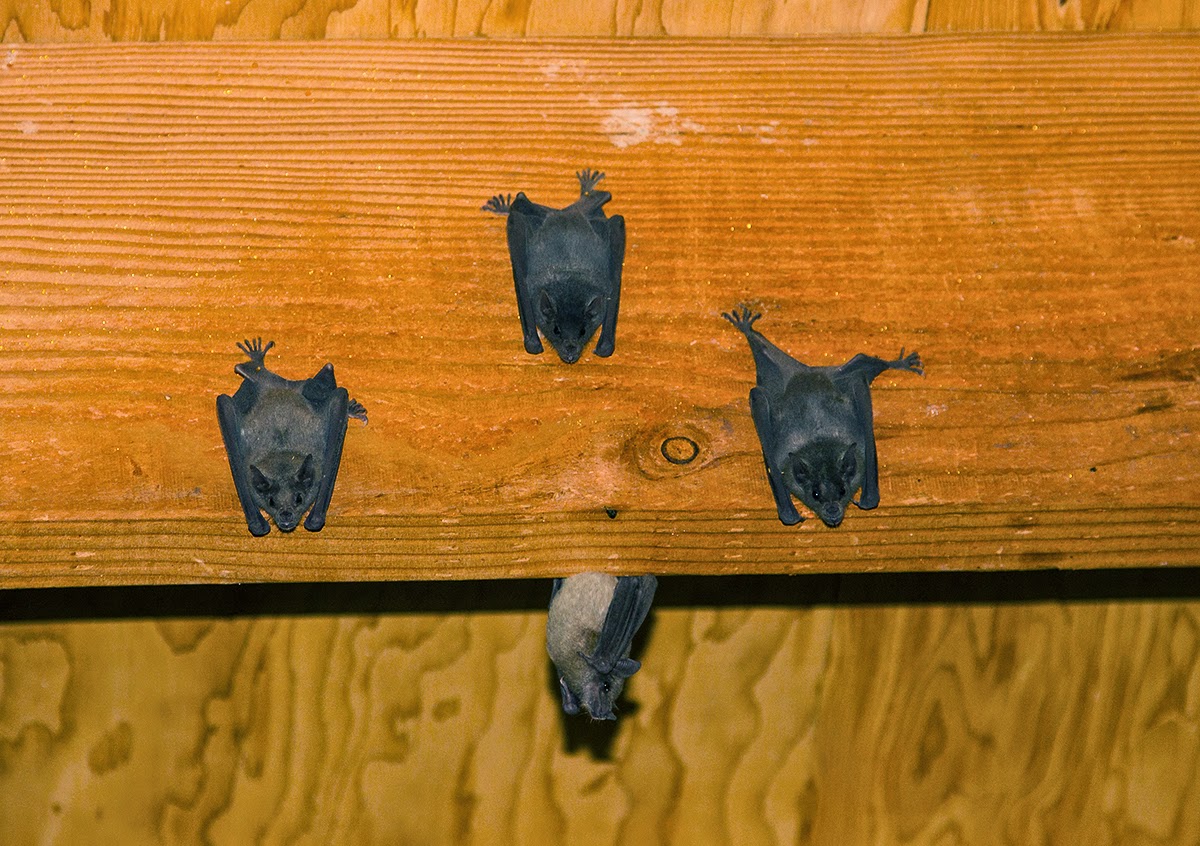 I am asking a few friends if they can ID these and will update if I find out.

I have always enjoyed observing comets and have sketched several nice ones over the last decade.  More recently with my foray into the world of DSLR photography I have also taken a couple pictures of comets such as C/2011 L4 Pan-Starrs in the evening sky.  With a few clear nights this week as the monsoon season wraps, I made a couple observations of Comet Jacques (C/2014 E2) which has been in the northern sky for a few months.  This comet was discovered this past March, and reached perihelion (its closest point to the Sun) on July 3rd 2014, passing Venus ten days later at a fairly close 7.9 million miles!  On August 28th, the comet made its closest approach to Earth at 52,415,761 miles, which is comfortably, a little more than half the distance to the Sun.

Two nights ago, on Sept 2 (UT) I took my first pictures of a comet through a telescope!  Using my 140mm refractor, I captured ten 20-second images of the comet, at ISO 1600 using the program BackyardEOS.  Below is a single image of the comet with the levels and contrast adjusted in photoshop. 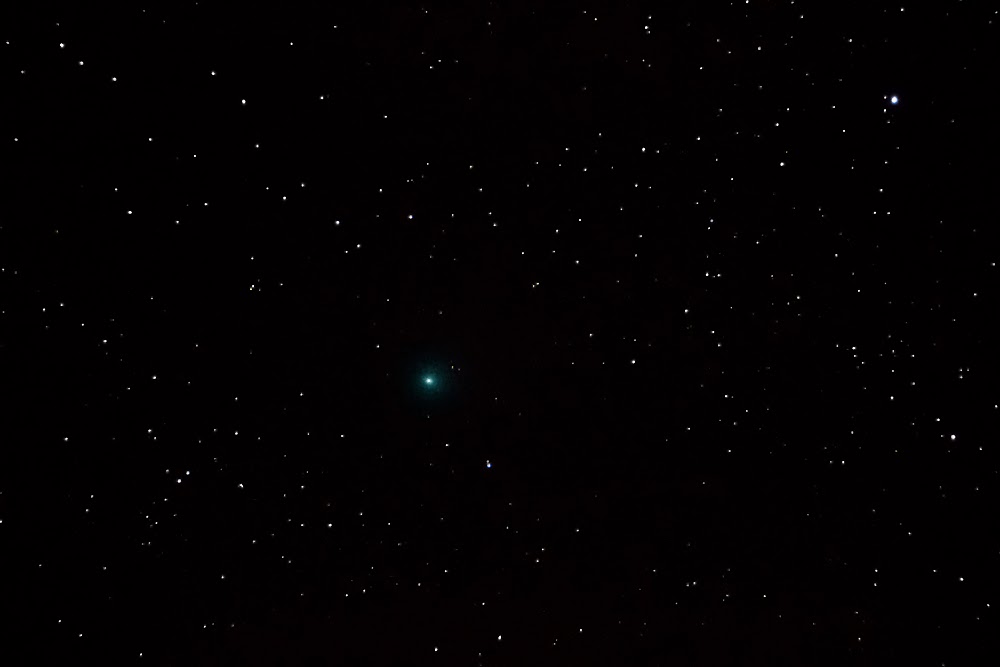 My intention in taking 10 exposures was to stack them, bringing out any detail that may not be visible to the eye or in a single exposure.  In the stacked image below, you can see that I aligned the images on the comets nucleus and as a result the stars appear to trail.  There is a brighter inner coma around the nucleus as visible in the above image, and stacking the exposures revealed a fainter outer envelope of glowing gas. 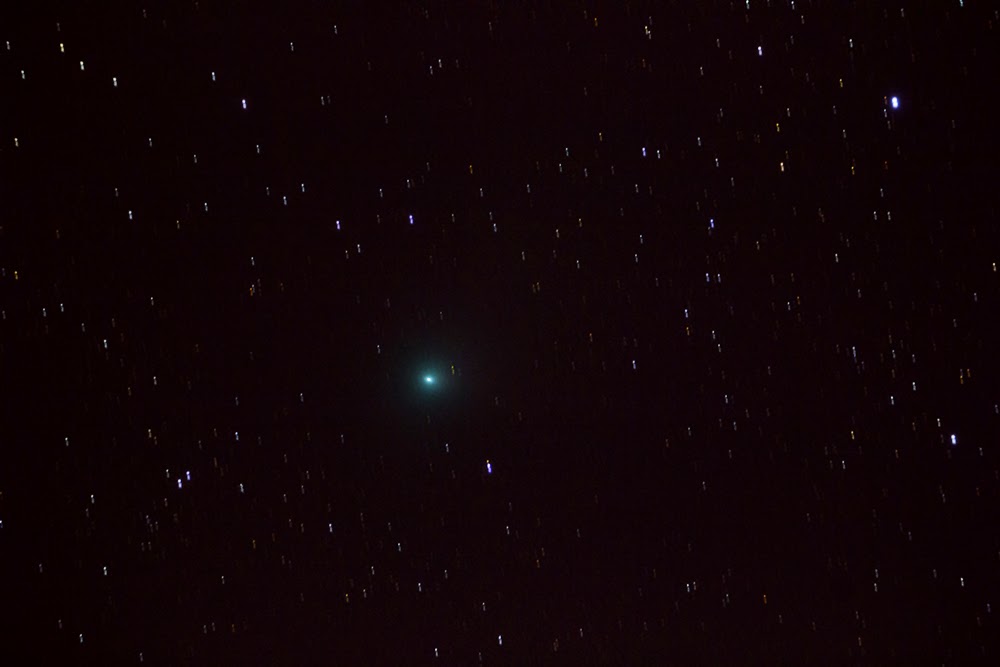 Being my first try with a comet, I think this little experiment turned out quite well.  This attempt was all about getting my feet wet imaging a comet with a DSLR.  Next time I will pay more attention to timing my exposures in order that the star trails are more uniform, and will also spend a little more time figuring out the optimal exposure.

I spent the better part of this weekend in Denver, Colorado and it seems that while I was gone Tucson went from the humidity of monsoon season to hot and dry.  While the weather in Colorado was perfect (to this Arizonan) with daytime temperatures in the low 80's and early afternoon showers, the weather back home is reminding us that our rainy season is all too fleeting.  It is hot and dry again, with the hope of some last gasp monsoon activity late in the week.  Before long, the sights and sounds of thunderstorms will be gone for another year.

Of course the upside to drying out is the return of the clear skies that make Southern Arizona a mecca for amateur astronomers.  As the coffee was brewing this morning I stepped outside and was immediately moved to set up my solar telescope and do some observing of the Sun for the first time in months.  The skies were bright blue with no breeze and observing the Sun with my hydrogen alpha telescope confirmed that the atmosphere was fairly steady as well.  After a few minutes observing I finished a cup of java and decided to try and image through the telescope.  It has been some time since I last attempted this and immediately recognized how out of practice I was.  Focusing was difficult, tuning the etalon filter to achieve detail on the laptop screen was challenging, and getting the gain, gamma and exposure times to balance out nicely was nearly a chore.  Looking in the mirror I do not see an astrophotographer.

Even my post-processing routine was something of a distant memory.  I had taken 30-second videos of the Sun at the full resolution of the ASI120MC sensor (my astronomical video camera) as well as binned 2x2.  The best 300 frames (out of about 900) were aligned and stacked in registax with some sharpening and denoising applied as well.  First up, the binned image: 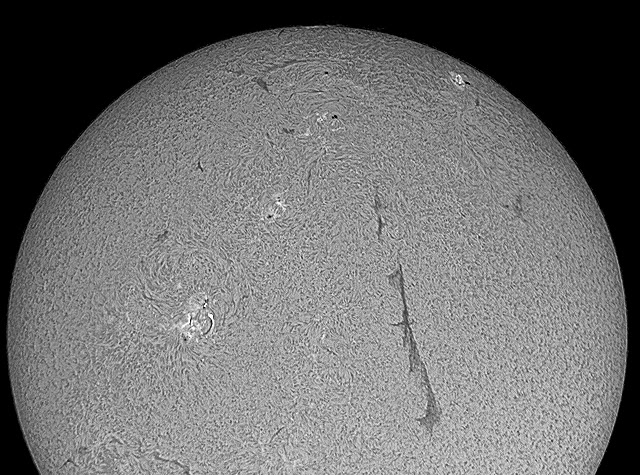 Next is the full resolution image and you can see that the atmosphere was impacting the final image more than when binning during capture.  The active region left of center was, I think, flaring subtly during the exposure as it seemed to brighten slightly more even after I pulled the camera and put the eyepiece back in.  Click the image to enlarge it to full size 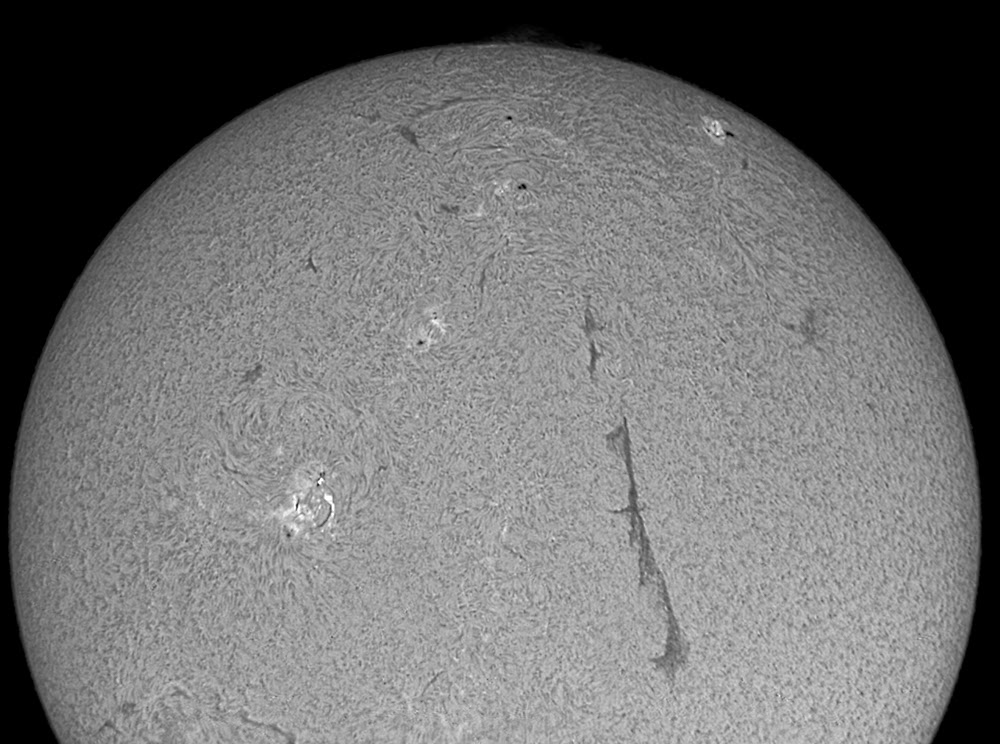 So what is the endgame of this sweaty exercise this morning?  Well, I am motivated for the first time since June to spend several hours after dark looking through my telescope!