Last night was the first clear night in several for us here in Tucson and I spent a few hours observing.  In addition to some typical targets, I observed the Supernova in M82 and was pleasantly surprised to see that it has dimmed only slightly.  It was still easily visible even in my 90mm refractor.  Using the 11 inch SCT, it seemed to have a slight yellow cast to it!?!

Of course, I also took an image of Jupiter under average seeing conditions-  and to my surprise, there is a very interesting feature on the "boring side" of the planet...a disturbance that is nearly as large as the great red spot and is also a shade of red.  It is more stretched than typical storms, and it will be interesting to obsreve how this region changes and how long it persists.  The image below was taken through my 11 inch Celestron Edge HD SCT with an ASI120MC camera...it is approximately 250 frames aligned and stacked in Registax with some tweaks in Photoshop. 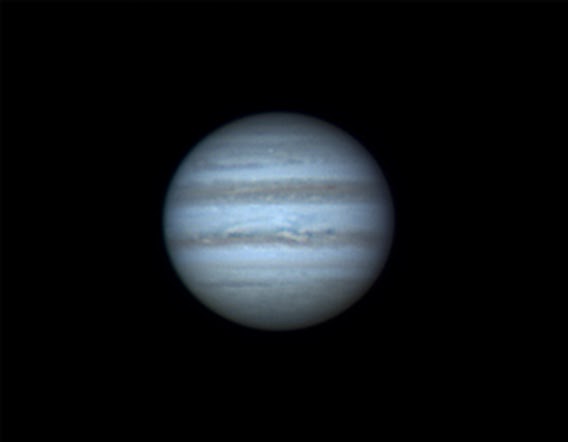 To my surprise tonight, Io was making a transit of Jupiter about the time I started observing tonight.  Naturally, I used the experience to practice taking an image, despite the fact that my telescope was not acclimated to ambient temperature...and the result is below.  It is a stack of approximately 400 frames.  Seeing conditions were slightly above average, and certainly good enough for my level of processing skill! 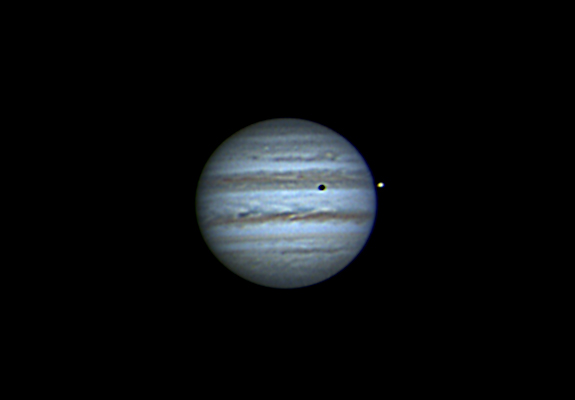 After a solid week of rather cloudy skies we had somewhat clear skies this evening over the Lost Pleiad Observatory.  While there were some passing cirrus, it was a very comfortable night to open up the roof and let the telescopes do what they do best- collect photons.  Tonights target for the little ASI120MC camera was the lunar crater Copernicus. This is a crater well known to most amateur astronomers as it dominates the Earth facing side of the moon and has a very large and bright set of rays extending from it.  The image below is a stack of about 500 frames aligned and stacked in Registax, with some additional sharpening in Photoshop.  It was taken through my Celestron 11 inch Edge HD SCT. 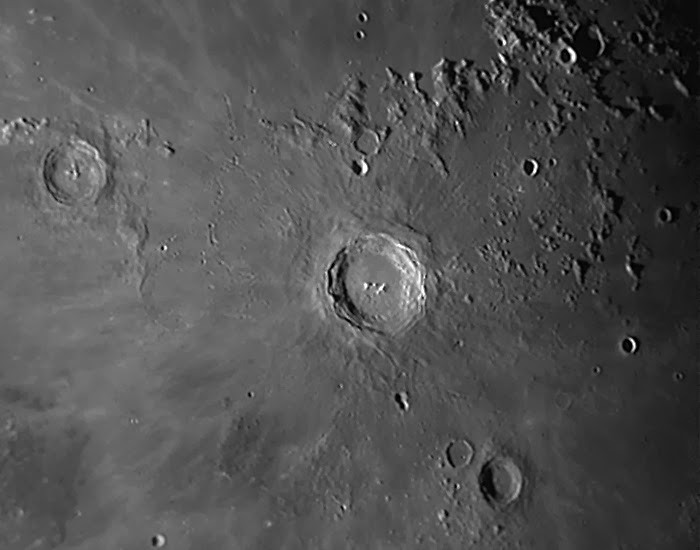 While this is certainly a reasonable image given my skill and the average seeing conditions, I can not look at any lunar images without thinking about the amazing images generated by NASA's Lunar Reconnaissance Orbiter (LRO). The images below are the central peak region of Copernicus and give you an idea of just how impressive the images from LRO are.  Make sure and click the images to enlarge them to full size! 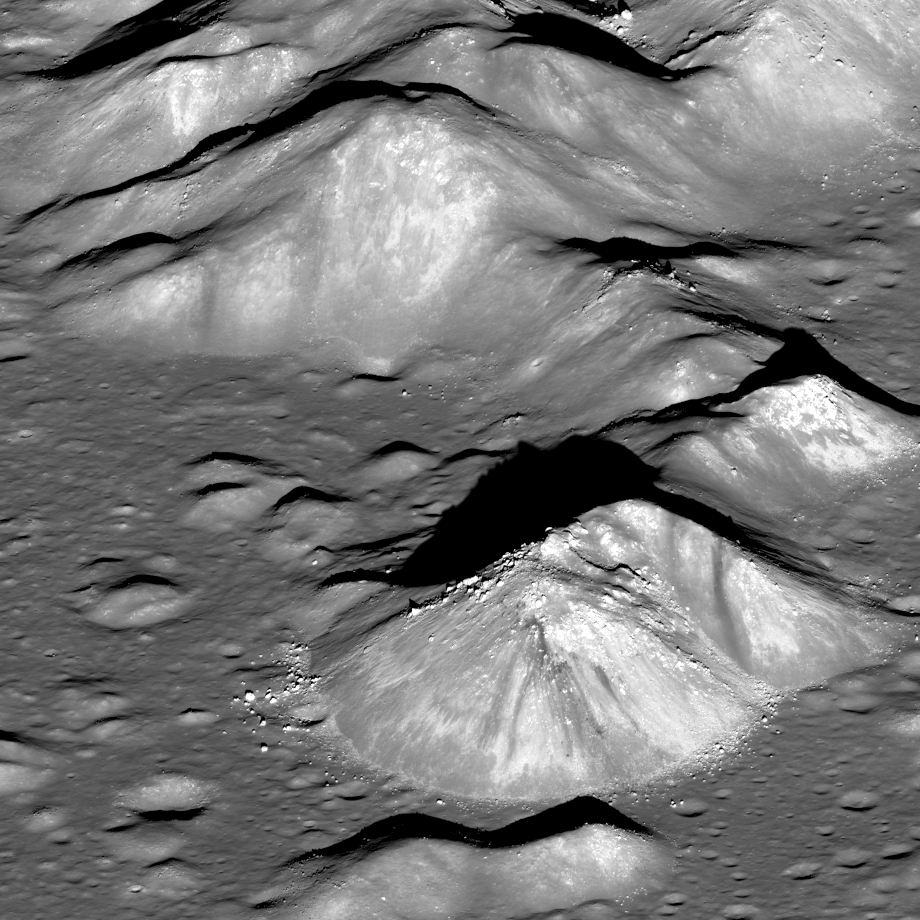 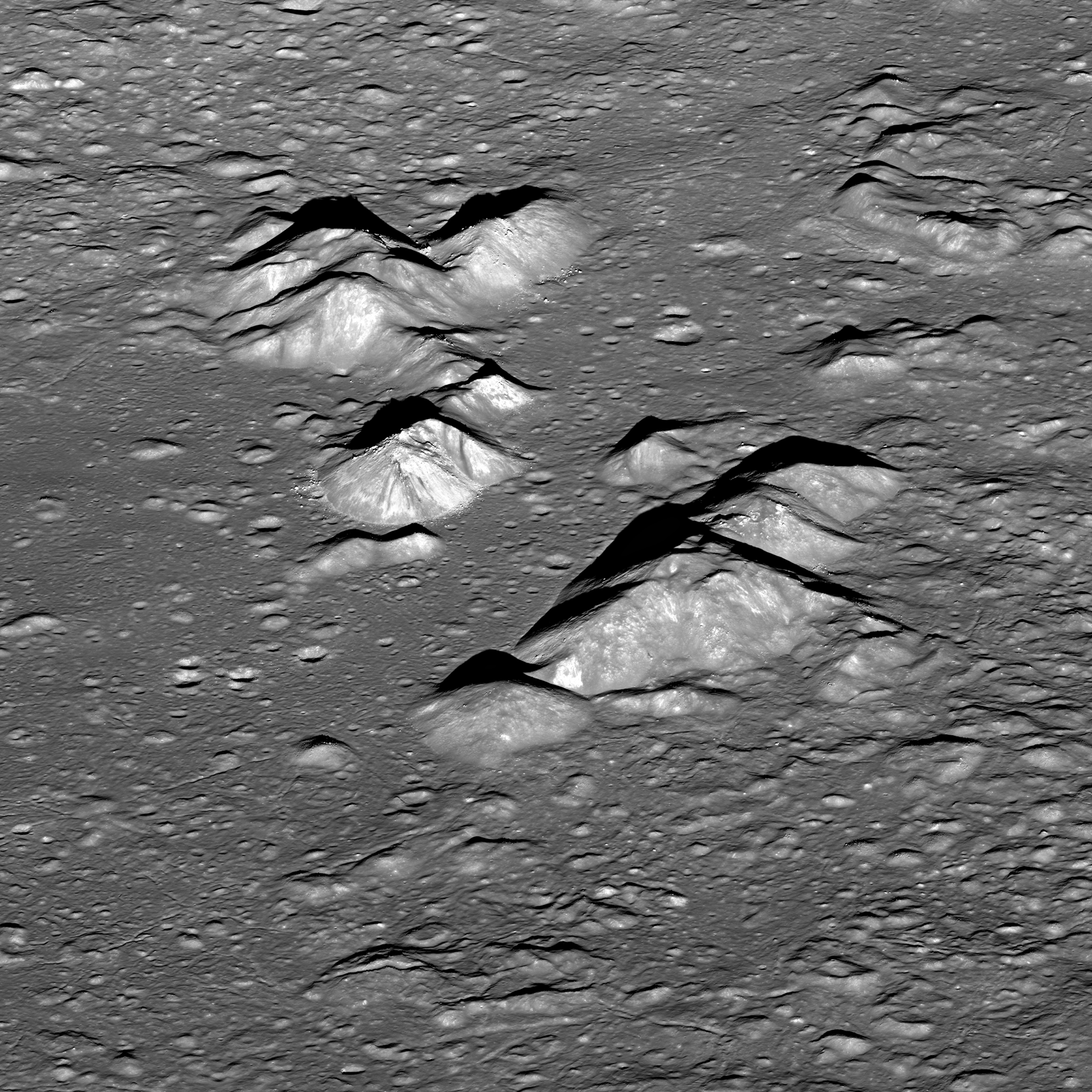 If you want to read more about these images and see others, check out this blog post from the LRO camera. If you have not had enough (and how could you?!?) watch the video below...and turn up the speakers to listen to the narration.

One of the benefits of working at the Mount Lemmon SkyCenter, is the opportunity to see many things that one would not normally witness down in the city, or even at lower elevations.  Yesterday I was at the Mount Lemmon summit all day and took a few pictures of some of the sights-  I'll present them here in chronological order.  First up is a picture of what I believe is a Blackhawk helicopter that made several passes and landings at our site during the early afternoon.  We have a helipad on site (think wildfire fighting, mountain rescue, etc) and it is likely that the pilot and crew thought our mountaintop site would make for a nice training location. 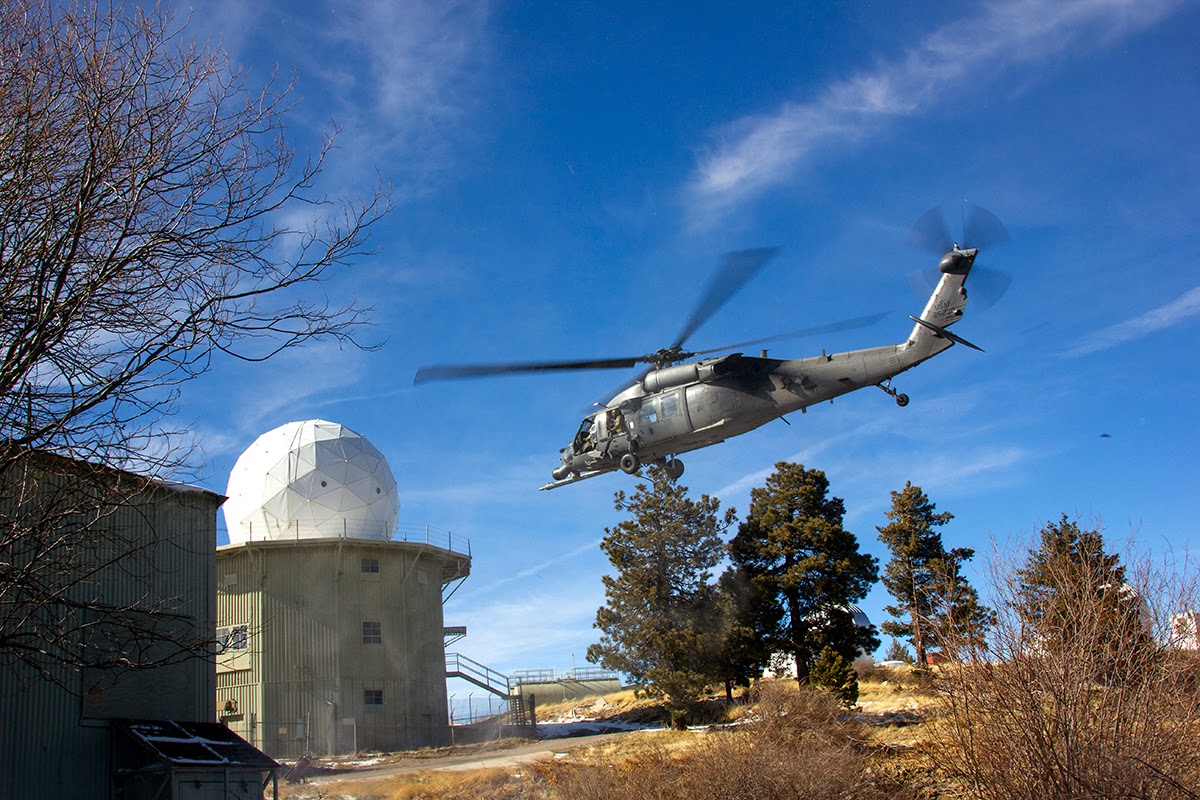 As the Sun was beginning to head toward the horizon, I took the image below looking east toward the Large Binocular Telescope (LBT).  While at least a 4 hour drive from the summit of Mount Lemmon, it is likely only 75-80 miles away as the crow flies. In addition to revealing beautiful colors on the intervening landscape, the low angle of the Sun illuminated the dome nicely and you can see it as the little white rectangle at the center of the image. 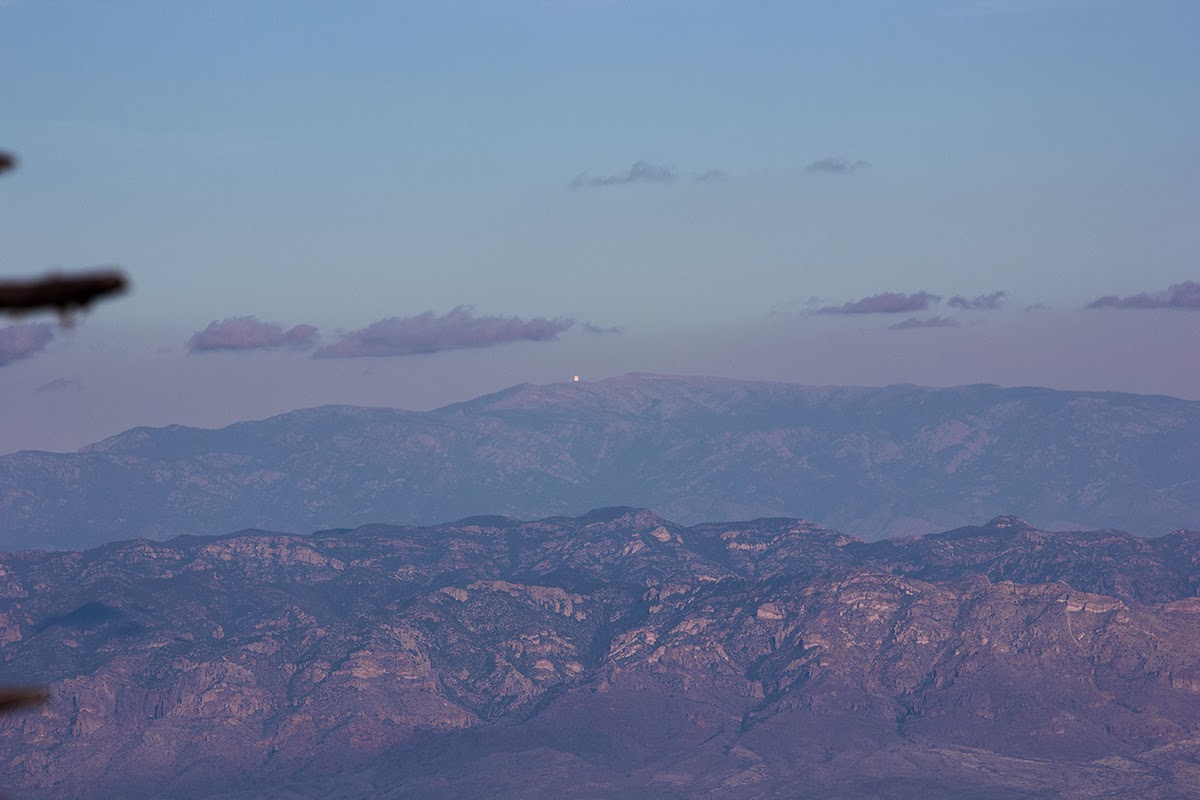 This is a full resolution crop of the center, and you can make out the slit in the center which opens to reveal the telescope. 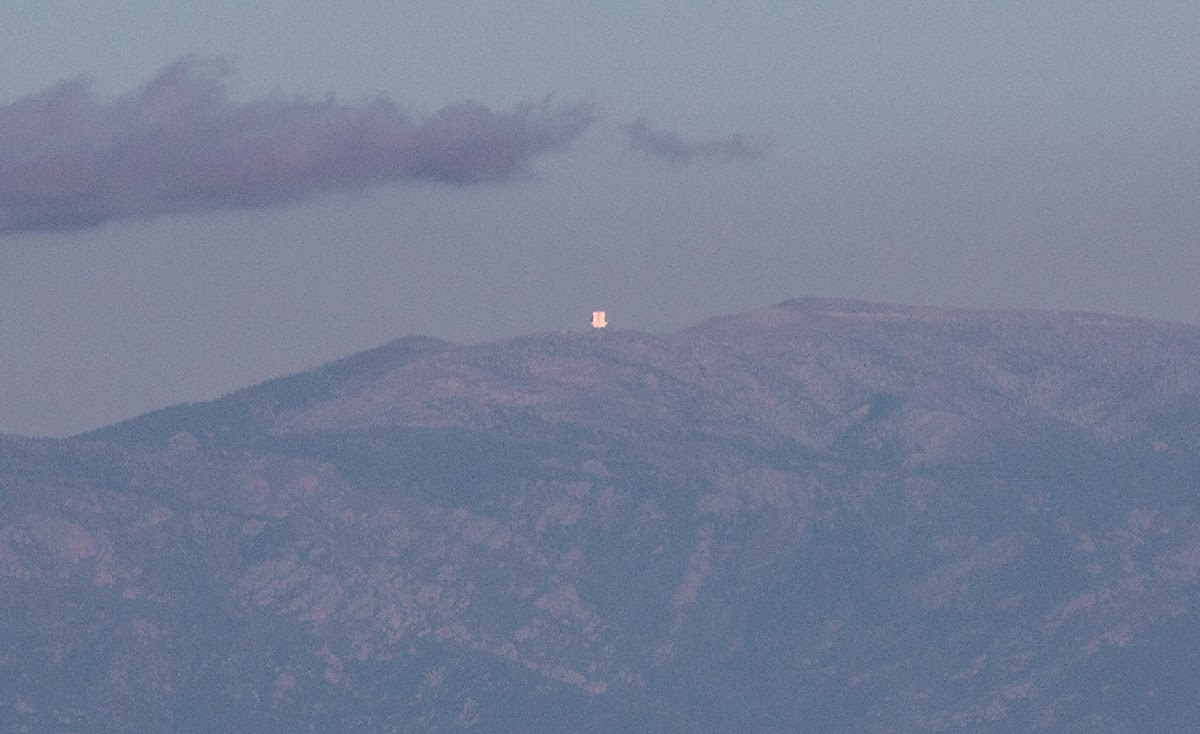 Finally, we are often treated to fantastic sunsets and last night was no exception.  Quite often we can see the green rim of the Sun and I am always trying to take a picture of it.  I managed to capture one of my better ones last night, mostly due to the fact that it was one of the strongest I have seen in some time.  While viewing this phenomenon typically requires some magnification, last nights green rim was exceptionally vivid. 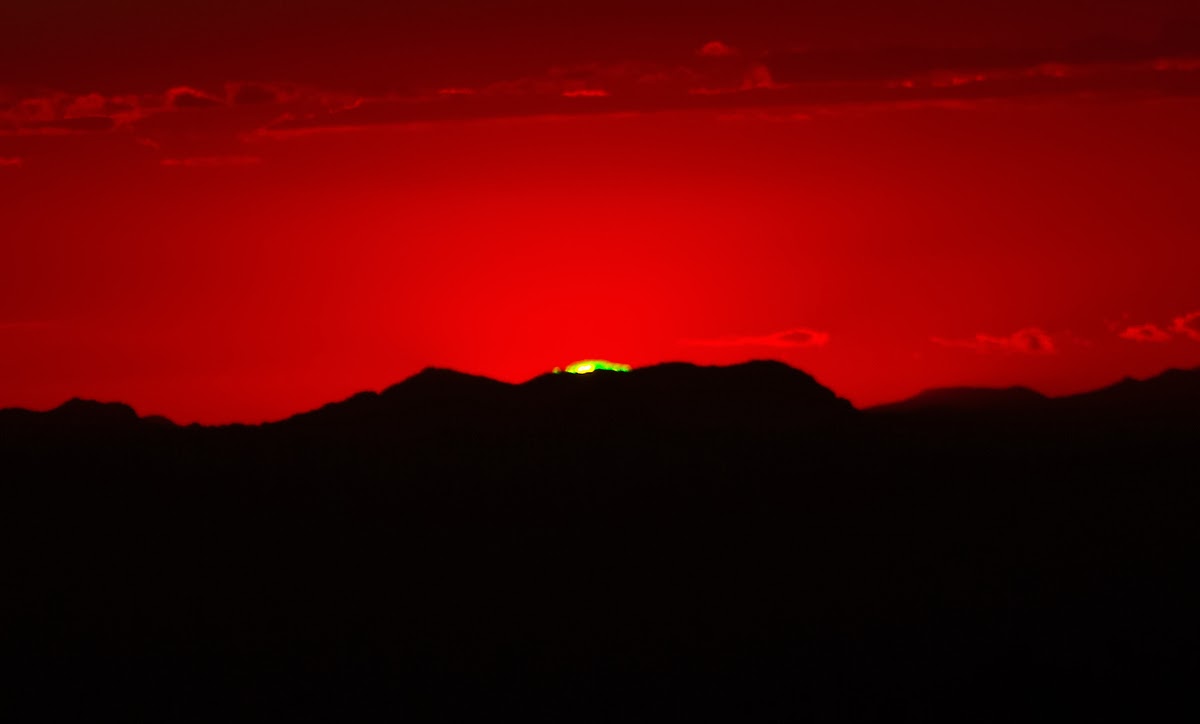 Perhaps the most popular stop on the Catalina Highway as it ascends Mount Lemmon north of Tucson is the Windy Point overlook.  Famous for (wind,) city views and many climbing routes, you have never seen it as in the video below.  Make sure your speakers are on...