For those of you that follow the sun regularly, you know that it is ramping up in activity.  With the increasing activity, it is beginning to take longer and longer for me to make solar sketches...this means that I am sacrificing some of the fine detail available at the eyepiece in an effort to capture all the varying regions and features.  I was able to make two sketches this morning under very steady and transparent skies.

There are 8 active regions (AR's) on the face of the sun right now, as detailed in the sketch at left.  Of the regions, AR 11176 is the largest and most dynamic.  It sports a plethora fine detail as well as several dark filaments that wind throughout.  There are several spots visible in hydrogen alpha, along with some moderately bright plage.  AR 11178 in the SE is small, yet also reveals a couple spots.  Of the regions in the southern hemisphere, 11181 is the brightest, and it too shows a single dark spot.  In the northern hemisphere, both 11177 and 1180 are moderately bright, with 11180 being more complex.  This region contains some very dark filaments as well as a single spot.  11179 is unremarkable.  Finally, there is an AR that has rotated into view in the northeast near the equator that is fairly bright with a leading spot.

White light views of the sun provide the most detailed views of sunspots, and the sketch to the right reveals many spots in all of the active regions on the east half of the sun's disc.  While AR 11176 is the most complex as it was in hydrogen alpha, the as of yet unnumbered region in the northeast contains at least a half dozen spots.  As this region is still very close to the limb, it is a bit difficult to ascertain it's true extent.  The white light sketch was made with my TEC 140 refractor and a Lunt Solar Systems Herschel Wedge.
Posted by Alan at 9:58 AM No comments:

It's true and not an internet hoax...the full Moon of March 19th will be the biggest since 1983!  Approximately 14% larger and 30% brighter!  Check out the explanation video from NASA.

Email ThisBlogThis!Share to TwitterShare to FacebookShare to Pinterest
Labels: Moon

Time to get back to posting!  I've been terribly busy between my day job, working at the Mount Lemmon SkyCenter, the start of little league season, and a torn MCL in my left knee!  That last bit was the result of a ski accident on Valentines day in Brighton, Utah...nothing that a bit of physical therapy and time shouldn't fix...

I was finally able to set up my telescopes on the sun this morning and take a look at what is undoubtedly the most activity I have observed since I started observing the sun with my own scopes.  The past two weekends have presented terrible sky conditions, and even yesterday I was clouded out.  Whatever this solar cycle turns out to be, it is fun to see El Sol ramping up in activity.  I made two sketches this morning, first one in white light and about an hour later I made one in Hydrogen Alpha.  The white light sketch below was completed at 1550 UT (8:50 AM MST) using my TEC 140 APO and a Lunt Solar Systems Herschel Wedge, under nearly perfect seeing conditions.  No atmospheric turbulence was noted, and I was able to utilize magnifications approaching 200X.  There are numerous spots in both active regions (AR) 11166 and 11169.  In addition to these regions which are approaching the western limb, there are 5 spots noted in AR 11172, and three spots noted in the northern hemisphere right on the central meridian.  These three spots correspond to plage noted in my hydrogen alpha observation further down.  To the right of my sketch, is an image from the Solar Dynamics Observatory taken at 1600 UT, just 10 minutes after my sketch.  Note that it is reversed east-west from my sketch. 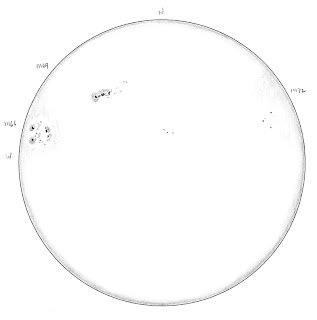 I then grabbed a second cup of coffee and started in on an observation and sketch of the sun in hydrogen alpha.  The seeing was beginning to get back to average, but the sun was still a sight for sore eyes that had not observed the Sun since February 24th.  The sketch was completed at 1657 UT (9:57 AM MST) using my Lunt Solar Systems 60mm pressure tuned hydrogen alpha telescope.  As mentioned there is a bit of plage on the central meridian that corresponds in location to the three spots noted above.  This area is not yet designated an active region but will no doubt be AR 11173 shortly.  AR's 11166 and 11169 are quite bright and contain several spots as well as many fibrils.  11171 is quite large in the southern hemisphere with a long dark filament snaking through.  This region was not noted in white light, yet appears as the largest region in hydrogen alpha.  Near the east limb AR 11172 displays weak plage and some short dark filaments within.  To the right of my sketch is another image from the Solar Dynamics Observatory taken at 1654 UT, during the time I was drawing.  Again, the image is reversed east-west from my sketch. 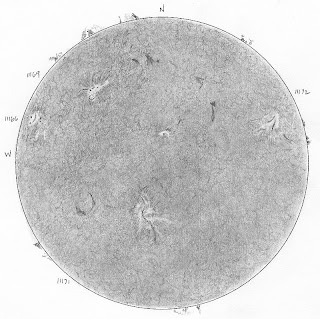