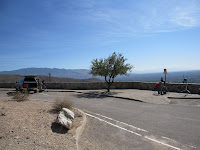 We had a very unique opportunity today in Tucson to see the International Space Station transit across the face of the Sun.  I have seen the ISS many times naked eye, and have even observed it through a small refractor as it tracked across the sky one night...so in truth, while I thought it would be neat I was not that excited for the event.  Fortunately I had thrown my white light solar observation equipment into my truck before work this morning, so as the time approached I was able to drive straight to our observing location, the Babad Do'ag vista on the Mount Lemmon Highway.  There I met up with Dennis Nendza and Jerry Farrar who were already setting up for the event.  Dennis was going to take both video of the event, as well as digital still images through his C8 telescope.  Jerry was planning to observe the transit in hydrogen alpha and I was going to make a sketch.

The transit was scheduled for 1:39 PM local time, and we knew that we had to be looking in advance and not paying too much attention to the exact time or we could miss it.  The ISS after all moves rather quickly and in fact only takes approximately 1 second to transit the Sun!  There was a pretty good breeze while I worked to sketch the Sun in advance of the transit, making it difficult to see fine detail.  At Approximately 1:30 I had the spots sketched and was now ready for the event.  At 1:38 I began to observe the Sun continuously and at approximately 1:39:12 the ISS flew on across!  I have to say that it was actually quite exciting and I am glad that Jerry kept reminding me throughout the week that this event was upcoming.  At left is my sketch which shows the approximate path of the ISS (hey, it flew by in a second!) as it moved northward.  It was very easy to see the central module, as well as all the solar panels arrayed out to either side.  In terms of size, the ISS appeared about the same size as the large sunspot AR11330 (although my sketch shows it slightly larger). 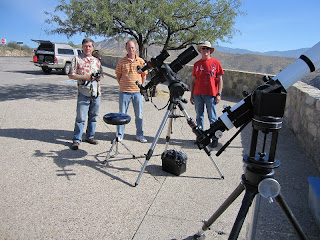 At the time of the transit, the Sun was at an altitude of 39.4 degrees and an azimuth of 210 degrees.  I hope to see the images and video that Dennis captured soon, and see how closely I was able to note the transit path during the one second I had to observe it.  The exact coordinates of the Babad Do'ag vista that we observed from are: 110:43:14.4 West, 32:18:32.9 North.  At right is a picture of our happy group, after our successful observation.
Posted by Alan at 4:05 PM